Release Celebration: All I Want 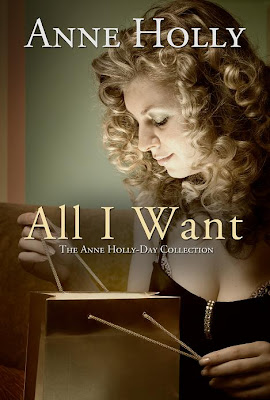 Releasing today: All I Want: The Anne Holly-Day Collection

New to paperback and ebook from Rebel Ink Press!

What happens when a band nerd sets his sights on the jock next door, a flighty witch thaws out a corporate stiff, or an uptown girl falls for a bartender? How about when a city slicker roughs it with a cowboy, a free spirited Spaniard seduces his calm and collected professor, or a fantasy writer teaches a no-nonsense doctor to see the magic around him?

Attraction, friction, and enough sparks to heat up the coldest winter!

Each story is unique, reflecting the glow and lore of the holiday that inspired it, but the collection is bound together by a single thread – the joy of taking the plunge into sizzling romance.
~*~


Including the following six erotic-romances:

Charity, a story for Thanksgiving

Charity Miller has spent her whole life in an urban island surrounded by the wilds of Montana where she’s never ventured too far from her plans. But when she heads into the Big Snowy Mountains to square a land deal one chilly November, her normally-professional self fades away. Maybe it’s the mountain air or finally quitting her diet. Or maybe it’s “real-live-cowboy” Joshua Rollings and his many attractions that has her off balance.Whatever it is, this Thanksgiving could give her a reason to be thankful for the rest of her life.

Good for the Goose, a story for Christmas

Successful scholar Dr. Natasha Mintz believes her divorce signaled the end of her romantic life. But when she gets snowed in one Christmas with a young Spanish grad student, she may want to rethink things. For Natasha, winter has never been so hot!

Bubbly, a story for New Years

Beth’s had the best of everything and the worst of everything. From the outside, a poor little rich girl, hounded by the press, but, on the inside, bruised by dark memories. When she seeks escape from her suffocating world on New Years Eve, she accidentally gets a taste for how the other half lives. Rough bartender Tig Riley offers her a whole new outlook on life in his arms and maybe even a brand new future, if only she can trust him. Can he really help her heal herself?

V-Day, a story for Valentine's Day

It all started with a serenade. A family like Daniel’s and the solitary pursuit of musical excellence is enough to make a young man crazy. No wonder all Daniel Vouks dreams of is getting away. He knows his violin will take him places in life, but the only place he really wants to be is next door. He’s been in love with his neighbor since he was fourteen, but can he ever make her see him as more than just a lovesick kid? V-Day is the story of a Valentine's Day weekend Daniel fears he may regret, but will never, ever forget.

One of The One Hundred Romances Project's top books of 2011!

And a new, previously unreleased story for St Patrick's Day: Cormack's Luck, exclusive to this anthology!

American writer Katie Cormack inherited more than a cottage from her wild Irish father, but also his wit, his stories and his family’s secret burden. Hiding away in the Irish countryside she’d always dreamed of, she communes with the fairies and beasts of her fantasy and folklore. When a local doctor comes down on her for filling his young son’s head with “nonsense”, Katie must show them both that not even St Patrick himself could drive all the dragons out of their imaginations. In the process, she might be able to reverse a wrong that has been hanging over the Cormacks for five generations, one that has brought them all together for the season of renewal.

*
I'm very excited to have another paperback in release, and I'm happy to see these stories find new life as an ebundle, as well. Each one was a fun, new challenge for me, and each one is an homage to various types of romance I've enjoyed as a reader. I hope you enjoy reading this collection!

Get it while it's hot!


Available at the following vendors in ebook:
Amazon US
Amazon UK
B&N
ARe
BookStrand
...and more!


And in paperback:
Amazon
B&N

Add the book on GoodReads, or find it on ManicReaders.
Available now to select reviewers in PDF upon request.
Posted by Anne at 12:00 AM