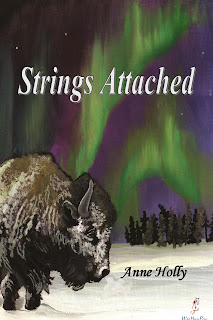 My first full-length release, Strings Attached, was released in May 2011 from Wild Horse Press.

The novel is a contemporary romance with sensual scenes, and is set in northern Manitoba, Canada, and in Australia. It revolves around the themes of loss and healing, and the risk in having a marriage end badly and deciding to try again. And, of course, about irresistible attraction, and the power of love to force us out of our protective shells. Josie, an optimist, must bring the damaged Theo back to life, and the results are often funny and often poignant.

It's a pretty simple story - man and woman meet; man and woman hate each other; man and woman fall in love. What is not so simple, of course, is how Teddy, a bullheaded Australian loner with a tragic past, can let go of his demons to accept the love and happiness offered by Josie, the eternal optimist.

One theme of the novel was inspired by reading an article on postpartum psychosis one summer. Mental health issues and motherhood are issues close to my heart, and I wanted to look at the long term impact of the problem. Also, it takes place in two environments I find fascinating - the wilds of northern Canada and the bush of Australia, and draws inspiration from my love of animals and living close to the land.

Will this couple's story have a happy ending? I can't really say, accept to say that even "no strings attached" moments of pleasure can lead to the strongest of bonds.

I hope you love Teddy and Josie as much as I have come to!

For blog posts relating to this book, click here.


Chase after love? As a single mother, Professor Liberty Sullivan knows better.
Between her flighty mother and a disastrous history with men, she's pretty
much soured on the whole concept of romance. Personal freedom and
self-reliance are her new guiding mantras. Raising her son and being a
career star are the most important things now.

An ex-cop who’s making a new life for himself and his daughter, Seth
Webster has every reason to play it safe. Then he meets Liberty. Prickly
about love, following some crazy anti-romance curriculum, she still makes
Seth's heart pound. And a lifetime of cop instinct tells him he's
about to teach Liberty that this romance will be anything but by the book.