The Romance of the Holidays 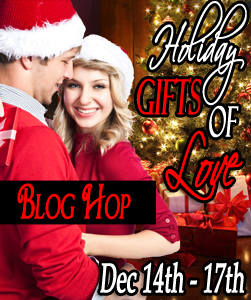 Welcome, blog hoppers. Perhaps we've never met. I'm Anne Holly by name and holiday writer by trade (eight or nine of my titles are "holiday books"), quite by accident - almost.

I have written before about what I like so much about holiday romance, though I never did intend on devoting so much of my writing career to this little faux subgenre. They just seem so magical to me – especially the autumn and winter ones, with their natural beauties. To write a holiday romance is to instantly connect with a well of emotions, memories and shared myths, and that’s a wonderful thing.

I once wrote about A Christmas Carol and how it gathers up so much of what’s special about the holidays:

Christmas is the time when we have in our collective subconscious the two extremes –the optimistic Christmas lover, Tiny Tim, and the misanthropic cold hearted Scrooge, who wasn’t really a bad guy deep down. Really, he was just hurt by life. Now, most well-adjusted people fall some place in between, but those two extremes represent the spectrum of romance: Someone full of love, and someone who has had the love beaten out of them. Those are the characters to which I am naturally drawn – and the redemption that is achieved when the one overcomes the other, and the romance that pools in their bond when it all works out right in the end. This is likely the main reason I write so much about the holidays. It is a time of salvaging the human from the ravages of plans gone wrong, of love unrequited and of tragedy spilt over a life time.

I wrote that about two years ago, and I still believe it. I am an optimist at heart, but it doesn’t come easy. Anyone who retains optimism into adulthood knows that it’s a decision one makes – not to forget or ignore all the setbacks and knocks, but to push through them and not let them get you down. This is where I’m at. Refusing to let life make a Scrooge out of me.

I also believe that the magic of the holidays rests in its ability to heal up a bit of the wounds of the year, and to renew hearts and spirits. It’s no coincidence it’s at the end of every year. This is why I believe in the restoration of Scrooge, and why the ideas found in A Christmas Carol float around the edges of so many of my books.

In my first Christmas romance, Unwrapping Scrooge, I fully embraced the premise that Christmas can heal. In it, a successful yet gloomy writer must decide if he can unscrooge himself enough to woo an optimistic young exchange student before she returns to Canada – and she must decide if she can meet him halfway:

To this day, that book remains one of my favourites, and those characters still hang with me.

My subsequent books have been less obviously engaged with Scrooge, but I can still tell he’s there because he’s build right into the magic of the season for me. In Good for the Goose, a twice-shy professor must make the decision to risk her heart again or be weighed down by the pain of divorce forever.

My holiday erotic-romance anthology, All I Want, features six couples who have similar decisions, about happiness and pain, and the courage it takes to restore and be restored. It’s a theme I love, and one of the reasons I am such a romance fan, and a fan of holidays.

Maybe I’m naïve to still believe in the magic of the holidays, but I refuse to believe Black Friday and credit card bills are all we have to look forward to every year. If you think this way, too, or you’d like to, check out my books. And, of course, have a very happy holiday, and all the best for the New Year!

GIVEAWAY
Leave a comment on this post, and be entered to win. I’m giving away the winner’s choice of Unwrapping Scrooge, Good for the Goose, or All I Want: The Anne Holly-Day Collection. (18+) Plus, this blog hop has a slew of other great prizes along the route, as well as a pretty amazing grand prize! (Please be sure to leave your email address so we can contact you if you win.) 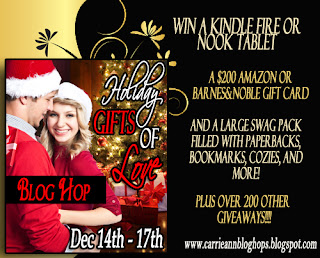 I read romance year round no matter the holiday. Glad to know that you have christmas magic in yous if I need a bit any time of year.

One of my favorite Christmas Romance Books is The Untamable Rogue by Annette Blair! The story is about Ashford Blackburne Fifth Earl and he has to get married and get his willing bride pregnant before Christmas or his grandfather won’t let him inherit his money. Ash truly needs to inherit the money because his late father squandered it all away and he is taking care of his mother. After getting stood up at the alter, again, Ash and his friends go to the local pub where the owner plays a drunken Ash in a card game…his consolation prize is the pubs daughter Larkin, who he wants to get ride of. Ash has to learn to forgive…Larkin has to learn how to trust…can two completely different people find love together. This is a cute, extremely funny, romantic story with a surprise Christmas ending!

Thanks for the awesome giveaway!

Thanks for the awesome giveaway!
cassandrahicks1989@yahoo.com

Either sounds good...but I kinda lean toward Scrooge.

Thank you for the chance to win some goodies and to become acquainted with another author.

Either one sounds good...but Scrooge sounds rather intriguing.

Thank you for the chance to win some goodies and to also get acquainted with new to me authors.

I finding the story of Scrooge rather intriguing.

Thank you for the chance to win some goodies and to get acquainted with new to me authors.

Thanks so much for participating in the hop! Happy holidays!

It's hard not to become Scrooge with the way the Holidays have become but as long as it's still fun for me to buy for those I love I will be in the Christmas Spirit.

Thanks for the great hop.
magic5905 at embarqmail dot com

Merry Christmas to you! Thank you for the giveaway!
verusbognar (at) gmail (dot) com

Happy Happy Holidays! Thanks for the great giveaway!
My fav thing about the holidays are the awesome sparkly lights!
grapeapril75(AT)gmail.com

Hello, thanks for the giveaway! I love everything about the Christmas holiday!

Every Christmas eve we go out to dinner and come home to watch the movie Elf.
Thanks for the chance to win and Happy Holidays!
sqwalker2@hotmail.com

Thanks for the chance to win!
Happy holidays!
natasha_donohoo_8 at hotmail dot com

I really enjoy the holiday season. I enjoy the smells, the food and lights. Oh and the music too. Not much into baking anymore. But I do enjoy tasting, ask my scales. Tee Hee. Thanks for being on the Holiday Blog Hop. Great blog. roya-clan@sbcglobal.net

Happy holidays and thanks for the giveaway! - regnod(at)yahoo(d0t)com

Thanks for the great giveaway! Christmas is definitely a time of hope.

I just love Christmas books, and actually have read more of them this year, then I think I have before...

Unwrapping Scrooge sounds great, thanks so much! Merry Christmas!
smoofrog@gmail.com

Thanks for the giveaway.
Happy Holidays!
morebooksthanlivros@gmail.com

If I were to pick it would be: All I want: The Anne Holly-Day Collection

What an awesome hop!! And a fantastic giveaway! Thank you!! Happy holidays to you all! Best wishes and many blessings!
shadowluvs2read(at)gmail(dot)com

Your books look like a lot of fun! I'm spending this holiday season with my family and hoping to win so I can read more romances. I don't have an ereader. Happy Holidays! lisarayns at gmail dot com

My favorite thing about this season is cookies; I love making and eating them. Everyone is so willing to share.
planterofhope at aol dot com