Looking for a Halloween Romance? 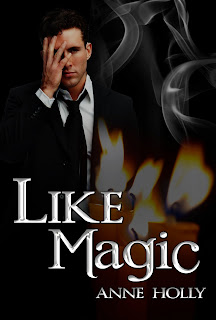 Available on Nook, Kindle and eBook:
Like Magic, an erotic-romance for Halloween - now only $1.99!


It was nearing midnight when Ian woke alone. Someone was lighting fire crackers in the alley below the window. He wondered, rather belatedly, whether the police had ever shown up and was surprised with himself for having dozed off in a strange bed on such a night. His car could be in the harbor by now, but oddly, he didn’t have the will to care. Stretching his overused back muscles, he figured the orgasms he enjoyed that night were nearly worth the loss.

He sat up in the unfamiliar bed noticing with a smile that Raven had covered him with the soft quilt before wandering off to wherever she was. It was a small gesture, but an unbelievably sweet one to a man who hadn’t been tucked in often enough as a boy. Had she kissed him on the forehead when she did it? He was willing to bet she had.

~*~
Also available in ebundle and paperback in All I Want: The Anne Holly-Day Collection!