Going Bump in the Night

A chilly wind whistling through the trees…

Let’s face it, everyone wants a good scare. It’s the adrenaline rush, the increase I endorphins when your heart starts pumping in overtime. That tingle of hesitation will draw you in and hold you hostage every single time.

It’s why us romantics are so drawn to a sexy alpha-male shapeshifter or a brooding bloodsucker. It’s why the taboo and untouchable becomes the desired. Of course, when we start talking about the anti-hero type of heroes, the phrase “going bump in the night” takes on a whole new meaning. The monsters become the love interests, and perspectives change. I don’t know about you, but I like the danger. The possibility of being devoured (and not in the happy fun way) by the scary creature really gets my blood pumping.

I happen to be partial to vampires. Ones like Christian, for example… He’s about as unconventional as a hero can get – piercings…tattoos…blue mohawk… VAMPIRE.

And I want one. If I had to pick a vampire to go bump in the night with, it would be him, hands down. Want to know why? Read more… 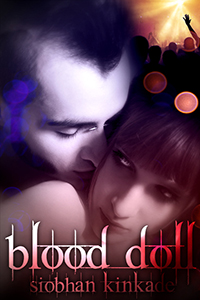 Lana Roberts has come to Boston searching for her twin sister, Sarah. The last place Sarah was seen is an underground club called The Mausoleum. Not realizing what she has gotten herself into, Lana enters, only to find herself in the company of a seductively frightening vampire named Christian Sterling – the only creature in the place that wants to help her. But there’s one problem.

If she goes back into The Mausoleum, she’ll be killed, but Christian has a plan…if he can only convince her to go along with it. Can a pair of Halloween costumes, the sexy stranger she has found herself falling for, and a little bit of unorthodox behavior save the day? And just how long can Lana keep telling herself she doesn’t want him?

“How long would it take?” Lana asked after several moments of silence. She shook her head and her eyes seemed to clear. Then she looked up at him, and her cheeks turned a warm, tempting pink color.

“What happens if it isn’t timed right?”

“You take in too much and turn.” He bit into the burger again, and her face crumpled in confusion.

“I thought vampires couldn’t eat human food,” she said, and glanced down at her own plate. Her stomach growled.

“Vampirism isn’t like you think, Lana.” He placed the burger back on the plate and wiped his hands on his jeans. “Like I said, we eat and drink, we breathe, we have heartbeats. We also crave human blood and will wither and die without it.”

“That’s kind of gross,” she replied, startling a laugh out of him. However, the laugh quickly died as he spotted two familiar faces peering through the grimy door at him. He looked straight at her, reaching across the table to take her hand.

“Are you planning to eat?” he asked. She looked down at the plate, then back up at him.

“Because I think we’re about to have company. We need to make a quick exit.” She grabbed two fries from the plate and shoved them in her mouth whole, which puffed her cheeks out like a squirrel. Christian smirked and patted her hand before pulling a twenty-dollar bill from his wallet and throwing it on the table. “Chew fast, sweetheart,” he said, rising from the booth. She grabbed the burger, took a large bite, then grabbed her straw and stuffed her mouth further with soda. Shaking his head in amusement, he took her hand and led her to the side door just as the front door opened.

The pair watching him paused, then whispered something to each other that was lost in the din of the restaurant. Christian tugged her out the door and started down the sidewalk at a brisk pace. Beside him, Lana chewed the mouthful of food quickly, fighting to swallow it without choking. Any other time he’d have laughed at her, but he heard the door of the diner open and the pair following them call his name.

“Chew faster,” he urged, picking up his pace. Lana was nearly running when she swallowed the final time and gave a weak, gagging cough.

“What’s going on?” she choked out.

“Exactly.” He swept her into his arms and began to run. Nine blocks later, Christian ducked into an alley and dropped her to her feet. “Do you trust me, Lana?” She looked up at him, her eyes wide and perfectly round, and nodded. “Then just go with me on this, okay?” She nodded again. He peered around the alley wall, listening as the footsteps moved in. “They’re coming,” he said, turning and walking her back into the shadows. He pushed her back against the wall and took her face in his hands. “Just go with it,” he said, and kissed her.

This was no tentative first kiss. Christian pressed his full body against her, pinning her to the wall as he threaded his fingers and laid siege to her mouth.