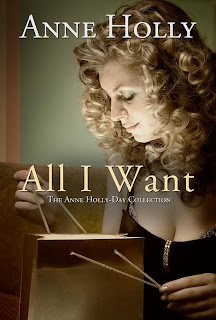 A sneak peek at my newest story, Cormack's Luck, the exclusive St Patrick's Day addition to my Rebel Ink Press anthology All I Want: The Anne Holly-Day Collection, available in ebook and print on October 3, 2012!

American writer Katie Cormack inherited more than a cottage from her wild Irish father, but also his wit, his stories and his family’s secret burden. Hiding away in the Irish countryside she’d always dreamed of, she communes with the fairies and beasts of her fantasy and folklore. When a local doctor comes down on her for filling his young son’s head with “nonsense”, Katie must show them both that not even St Patrick himself could drive all the dragons out of their imaginations. In the process, she might be able to reverse a wrong that has been hanging over the Cormacks for five generations, one that has brought them all together for the season of renewal.

I’ve as good as slept with him. Shit.

Well, not completely shit, she had to admit. She’d needed it, really. Even as her nerves hummed over how to proceed with this awkward situation, she could feel a languid relaxation seep through her limbs. Even before her marriage had gone south two years ago, her sex life hadn’t been Hollywood quality and her dry spell since had taken its toll. This afternoon had shown her the danger of letting certain appetites go unfulfilled for too long.

For instance, you could end up having near-sex with a man who seemingly loathed you. Or one whose ancestors had been mortal enemies with your own. Or, such as in her case, a man who fell into both categories.

She heard a flush, then the tap running, and a rattle from the bathroom. Then the harsh click of the old-fashioned light switch. He didn’t emerge immediately, even with the lights out, and she wondered if he was mentally girding his loins the same way she was.

Oddly enough, though they’d just ripped into each other like deprived animals, she felt the need to armor herself with multiple layers of wool and she fidgeted to make sure everything but her hands and face were fully, primly covered. And she might have even gone for a veil if she’d had one close by.

Shutting the gate after the horse fled, clearly.

When he finally stepped out of the bedroom, she spun back to the kitchen counter. She could feel the hot flare of her blush, which likely spread from her pale toes right up to her scalp, clashing with her red curls.

“Coffee?” she managed to croak.

“Er, no.” He, too, was moving in quick, jittery movements, gathering his jacket off the divan and already standing with his hand on the doorknob. Even with her back turned and her vision limited by what she could glimpse through her nervous side-eye, she knew he was eager to flee.

Despite being in his mid-thirties, he was inching towards the door like a naughty boy caught in theft.

Clearly, she wasn’t the only one to have instant regrets now that the hormone haze had dissipated. She should have been sympathetic, but dammit, he could have been a little less obvious about the fact he found her something akin to leprosy.

When he wasn’t sticking his tongue down her throat, that is.

She shuddered to think of what he’d done. What she’d let him do. Hell, what she’d begged him to do. And, oh my, what she’d done in response!

“Yes,” he answered a bit too quickly and with a touch of frantic gratitude. “Lots to do. You know how it is.”

And with that he was gone.

Good riddance and may I never set eyes on him again, Katie thought to herself. She rested her forehead against the cool of the kitchen cabinet above the coffee maker and wondered how the hell it had all occurred.

“I’m a grown woman,” she declared aloud. “Thirty damned years old, and independent. If I screw anything up, it’s my own fault.”

It won’t happen again, she added.

Even if Dermot Barrigan was a beautiful feast before a starving woman.


All I Want: The Anne Holly-Day Collection
Coming October 3!

What happens when a band nerd sets his sights on the jock next door, a flighty witch thaws out a corporate stiff, or an uptown girl falls for a bartender? How about when a city slicker roughs it with a cowboy, a free spirited Spaniard seduces his calm and collected professor, or a fantasy writer teaches a no-nonsense doctor to see the magic around him?

Attraction, friction, and enough sparks to heat up the coldest winter!

Each story is unique, reflecting the glow and lore of the holiday that inspired it, but the collection is bound together by a single thread – the joy of taking the plunge into sizzling romance.