Today I have Sean from Love at First Bite with me.

So Brian, being gay in a small town must be hard. Have you ever wished you weren’t?

There were times in the past I wondered why I was born this way, but I’m comfortable being me. If people can’t handle the fact that I’m gay, that’s their problem, not mine.

Different. I can honestly say I’ve never with anyone like Brian before. But then, that isn’t just because he’s a vampire. I know the moment he enters a room, without even looking. And when he bites me – it’s incredible!

You wouldn’t change anything?

Well, the idea of growing old while he stays the same bothers me sometimes. We haven’t really discussed the possibility of him turning me, but I know it will come up in the future.

And it wouldn’t bother you to be a vampire?

Honestly? No. It would allow me to be with the man I love for eternity. What’s not to love?

You’re that certain he’s “the one”?

Oh yeah. I can honestly say that I can’t see myself with anyone else, ever. Brian is amazing, and I don’t just mean the intimacy,  but that’s pretty wonderful, too. He completes me.

Well, thank you for stopping by, Sean. I can’t wait to hear more about your story. 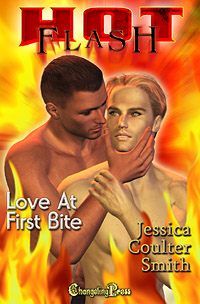 When Sean discovers Brian is a vampire, he’s ready for love at first bite.

Sean has spent his life in the small-minded town of Willow Grove. Given his preference in sexual partners, finding romance has always been a challenge – until Brian.

When Brian walks into Sam’s Place, the first thing he sees is Sean and he knows he has to have him. When he takes Sean back to his place, he reveals his true self and hopes that Sean will accept him -- fangs and all.

I glanced at my watch and realized I didn’t have much time before I had to be at work. With a groan, I slipped out of bed and dressed.

“My car is still at the bar, and I’m going to be late for work.”

“Are you sure?” I couldn’t imagine driving the sleek machine he owned.

He chuckled. “Not like I’m going to use it anytime soon. I may not sleep all day, but I am stuck here until the sun goes down.”

“Thanks. I’ll bring it back as soon as I get off work.”

I warmed from the inside out at his words and knew I had a goofy grin on my face. Blowing him a kiss, I grabbed his keys and left. I had less than half an hour to go home, shower, change and get to work. I think it was safe to say I would be late.

Forty-five minutes later, I pulled into the parking lot at work, grabbed my bag and rushed inside. I’d already called the secretary to let her know I was running behind.

Thankfully, she hadn’t asked any questions.

“Any messages, Jane?” I asked as I hurried by her desk.

“Just one, from some guy named Brian.”

I felt my face flush and grabbed the note from her. She gave me a knowing smirk as I walked off. Thank goodness Jane was cool with me being gay. If anything, it made me her favorite guy in the office. She never had to worry I would hit on her.

When I got to my desk, I put my stuff down and picked up the phone. Brian answered on the first ring.

“It’s about time,” he said playfully.
“Miss me already?”

“I’ll swing by your place when I leave here, probably around five-ish.”

“Bring a change of clothes. I liked you staying the night.”

“Me too,” I murmured with a smile.

He hung up and I logged into my computer. As I skimmed through my email, I saw something from my boss. When I opened it, I groaned. My project was now due tomorrow instead of next week. There was no way I could get the CAD drawings done in time. It would take a miracle. I’d been pacing myself for my original due date, not expecting such a radical change.

I picked up the phone and called Brian back. “Hey, I’ve had a change of plans.”

“Find someone hotter?” he joked.

“No, that couldn’t happen. But work did… I have a project due tomorrow that wasn’t supposed to be finished for another week. If I don’t stay and work on it, I’ll never get it finished.”

“So, I’ll bring you something to eat and we can spend a little time together later tonight.”

I smiled, glad he understood. “That would be great.”

After we hung up, I was still smiling. Not only was he excellent in the sack, but he was accepting and flexible with my work schedule. I couldn’t have asked for more in a partner. Not that we were at that stage yet. At least, I didn’t think we were. I hadn’t thought to ask when he saw clients, but I’d bet he saw them at night. Otherwise, how would he get to the office? I hoped I wasn’t cutting into his work time. 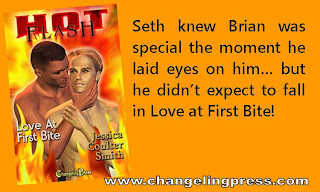 Thank you for inviting Sean to your blog today! :) I know he had a nice visit.