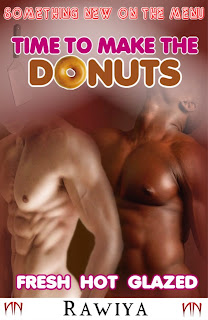 Here is a little excerpt from Rawiya's first solo book, Time to Make the Donuts

Available in February at Amazon, All Romance, and Smashwords

Andre, a customer, comes in and pays him a visit. The two lock eyes and immediately connect on a personal level. Because of this, Christopher decides to pursue when Andre passes him his card. He wonders what the young man does for a living however, he’s so smitten by him, Chris doesn’t give it much thought.

Little does the shop owner know, Andre actually works for his biggest competitor as a secret shopper and has been told to use any method necessary to find out the secrets of the shop as well as convince him to sell his shop and become part of the national chain.

When Christopher finds out, he has a surprise for Andre and deals with him in a rather humorous way. Will he trust Andre once he finds out this fact? Will he give up his shop under the pressure the well known franchise?

With the song Manic Monday by the Bangles playing on the overhead, Jesse stood behind the cashier Wanda, getting orders for customers while Christopher finished putting the third batch of donuts in the oven. The owner always felt better when the store officially opened for business making him forget about the lack of sleep he got from the night prior or the fact he’d been in the restaurant since two a.m.

He pushed the double doors open as he came from the kitchen, watching the customers lining up in front of the register. They were ready to give their morning rush orders of coffee and donuts or bagels. Others who had time sat at the long laminate counter waiting for one of the waitresses to take their requests. Bigger groups of people or those who liked to take in the atmosphere sat in booths to sample the diner’s finest delicacies. Part of the charm of Christopher’s place was it catered to everyone in some form or fashion while offering great service. Something he knew that other place could provide.

While waving at a couple of regulars, Christopher started to help Jesse bag a few orders. Unlike most owners, he always chipped in to help on the front lines regardless if it were busy or not.

Jesse smacked him on the shoulder. “Yo dude, you look like you haven’t sleep in weeks.” The husky redheaded woman poured a cup of coffee for a lady in front of her.

“Well thanks,” he frowned. “I’m still being bombarded by calls from that place to get me to sell. They won’t quit. Don’t they get the message?”

“Apparently not. They been callin’ ya at home?”

“No on the cell and all because that one girl that used to work here got employed by them. They thought by doing that, they’d be able to pick up some secrets or learn something new about me, or the restaurant. Didn’t they know I brainwash my former workers,” he laughed.

“You wish. You just don’t share anything important which is smart, now me on the other hand,” She cocked an eyebrow. “I could be an asset to someone if they swayed me to leave.”

Christopher stopped immediately and glared at her. “You’d never.”

She drew up her lips. Within seconds she guffawed and smacked him on the back pretty hard. “Babe, no, never. I’m just messin’ wicha. I’d never leave your side. I told you the day Jayson died I’d help you run the place till we couldn’t do it anymore and I meant it. You know I’m a rebel at heart. I couldn’t go anywhere and work for “the man” and feel comfortable. I ain’t wearin’ no suit and tie for nobody.”

Christopher choked a little from the slap and let out a small sigh of relief. He didn’t know what he’d do without Jesse if she left. Good thing she always had such a good sense of humor and because he liked her as his second in command, he vowed never to piss her off if he could help it. Yes, they’d had run-ins a couple of times over various decisions but he knew most of the time the two of them would come to an agreement in the end.

“Well I’m glad about that.” He straightened his tie and shrugged his shoulders. “I need you here, Jess. No bones about that. Most days, I’m not sure what I’d do without your intellect.”

She blushed and chuckled. “Aw, Christopher, I swear if I didn’t like women and you didn’t like men we’d be a match made in heaven, right?”

A woman with a baby in front of them giggled and took her bag.

Christopher sighed, “Jesse, we really need to stop talkin’ about our personal business up here, huh?”

“Yes, duly noted boss man. Sooo…maybe we should go in the back so I can ask you about the dude I hooked you up with last week.” She nodded and turned to him.

The manager rolled her eyes. “Just what the hell are you searchin’ for in a man, Chris? You gotta lower your standards just a little don’t you? Ain’t no pretty boy with money and a squeaky clean disposition comin’ into your life any time soon.”

“That might be true but, well, he just didn’t do it for me. I liked that he’s self-sufficient, he’s pretty burly which I, erm, well, I’m not into overly muscular men. He doesn’t have to be a model but he does have to be easy on the eyes.” Christopher paused, “Didn’t I just say I didn’t want to talk about my business up here?” He cocked an eyebrow.

“Oh sorry, let’s go in the back a moment then. I gotta hear the rest of this. Wanda, you okay hon, since the rush is about done?”

The younger blond nodded, “Yep, I’ll call ya’ if I need ya.”

“Great.” Jesse gripped Christopher’s shoulder. “To the back then chief to get another batch ready then, huh?”

“Yep. We’ll be back, Wanda.” Christopher went through the doors and Jesse followed him. He really enjoyed when he and Jesse could work and talk at once. Made the day go by a lot faster. If only he had something other than his seemingly desperate romantic situations to converse about. 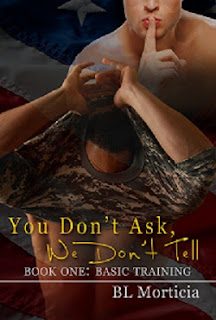 Here also is an excerpt from BL’s new one, You Don’t Ask We Don’t Tell: Basic Training

Coming Feb 3, 2012 BLMorticia with her snarky series about a man looking to shed his "gayness" The Army's the place to get right, right? Think again!

A gay, curious young man, Cody McCayne has fallen over the fence more than a couple of times. He's hoping the armed forces can help him become more of a straight man given he's under extreme scrutiny from his family. To make it happen, Cody leaves behind his on and off again lover, Dari Kirk.

At the local recruiting office, Cody meets Corporal Justin Belvidere who can tell Cody’s hiding something, running away from something he needs. And Justin knows just what training facility to send Cody to, the one part of the army everyone knows as one of the finest and most upstanding platoons.

Captain Morris Dunst runs Army company 9669, a proud group of men known for their tenacity, wit, and strength. In fact, Dunst has produced some of the best soldiers in his ten year tenure, teaching them how to be real men.

Book one begins with the introduction of Cody McCayne and his childhood friend Dari Kirk who’ve been having sex on the down low for a while until they’re found out. This scares Cody and he decides to cease their relationship.

Due to the constant taunts and chiding of his father and peers, he decides that joining the army is the answer for him to “get right” in his words. He thinks this will dispel his gay persona and make him a real man.

However, during his ten week tenure he’ll meet the characters at Fort Jackson of company 9669, the only all gay and lesbian platoon who operate as straight soldiers by day but play and teach at night. This section is run by Captain Morris Dunst and his lover, first Lieutenant Darios Bright.

When he straightened the wheel, he got out the truck, sprinting to the place he hoped held his ticket out of here. He opened the doors, letting a couple of army men out before he went in.

“Wow,” he mouthed, glancing about the place as if he were a tourist. Large hallways, cream colored walls with decorative crown molding. The floors were made of linoleum. Everything was so clean. The glare blinded Cody.

His eyes fixed of the small line of men huddled together to hand their papers to a soldier sitting behind the desk. Cody tightly gripped the application in his hands.

Do I really want to do this? How will I handle being yelled at by someone basically the whole time I’m there?

Suddenly, young McCayne began to question his decision. He tapped his feet, fumbling with his free fingers as he eyed the men talking with the representative.

Why am I doing this?

Yes, why the fuck was he? Joining the army just so he could gain acceptance? Make his asshole dad proud of him? Would this be worth it?

“Iknowiwantthisiknowihaveto…damnit!” He grit his teeth.

What if he didn’t like army life? What if the captain was an asshole he wouldn’t be able to tolerate?

What am I saying? They’re all assholes. None worse than my dear old dad.

The men in front of him inched closer to the recruiter’s desk.

Cody could feel his palms sweating along with his brow.

What the fuck? I need to man up. That’s my whole reason for doing this right?

He straightened his shoulders and cleared his throat.

Only one more ahead of me. I can do this!

The young man shrugged his shoulders and gulped hard. He stuffed one hand in his pocket and eyes darted from left to right.

“Next!” The man in front of him moved away and suddenly it was Cody’s turn. “Yes…um…Sir?”

The guy behind the desk gave him a wry smile. “Yeah, you ready to come serve your country, boy?” He has a slight southern accent and piercing blue eyes.

Damn, the man is hot.

TY for posting this for me..