Extra Sample: Good for the Goose 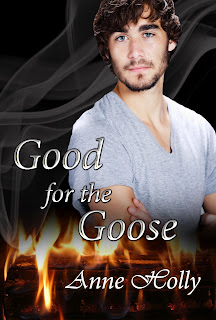 Successful scholar Dr. Natasha Mintz believes her divorce signaled the end of her romantic life. But when she gets snowed in one Christmas with a young Spanish grad student, she may want to rethink things. For Natasha, winter has never been so hot!

Natasha found herself slightly distracted marking papers at the dining room table that day. Every time Raphael moved, she looked at him which in itself was a mistake, as looking at him only distracted her further. She no longer thought it was her imagination when he went out of his way to get her attention, or brushed against her leg under the table, or slid his finger sensually along the rim of her mug when he insisted on refilling her coffee. His removal of the stacks of finished exams was so gallant it bordered on old fashioned wooing.

Awareness. That’s what it was, she thought. They were profoundly aware of each other with a capital A. His scent, his masculine presence, his male interest in her, nothing about him escaped her notice that morning. Judging by the smoky look that often entered his eyes when she caught him looking at her and the way he'd smile and look away when she lifted her head unexpectedly, he was no less affected by her.

This was dangerous territory. They had no business being aware of each other. Natasha was old enough to be his...well, his aunt, she thought defensively. It was insane.

Yet, there it was. Awareness.

Despite the distractions and anxiety, they managed to complete their marking well before dinner and entered the grades into the spreadsheets. Because of the weather, she decided emailing the final grades to the department administrative assistant would be good enough and would spare them the drive to campus. Reluctantly, though, Natasha had to admit the weather wasn’t bad enough to give her an excuse to delay driving him home.

“Well,” she said, popping the lids on the file boxes full of exams and dropping them beside the sideboard in her dining room. “I guess it’s time for you to be getting back.”

“Actually,” he said in an ashy voice with an accent that seemed thicker than before. “I was hoping you'd agree to dinner.”

Feeling ridiculous, Natasha attempted to calm herself outwardly and scrambled for the sophisticated voice that normally came so natural to her. “What a good idea. I certainly owe you a meal,” she laughed. “I do appreciate your work, above and beyond the call of duty. Name the place. We’ll go wherever you like.”

“How about right here?” he shrugged in a quintessentially European way. He braced a young, strong hand against the counter near her hip. “I don’t see why we should leave.”

Feeling her heart leap into her throat, Natasha was both giddy and appalled by the suggestion of additional time alone with him without work as a barrier. Yet his flirtatiousness flattered some feminine aspect of her she thought had long ago left the scene in the wake of conferences, departmental business and boxy woolen suits, not to mention her husband’s bitter betrayal.

Her ex-husband, she reminded herself. The guy with the med student. Why shouldn’t she have her own graduate student? The naughty thought brought the hottest little quicksilver smile to her face. A smile which wasn't lost on Raphael, who returned it, changing the atmosphere between them in an instant.

“Why indeed?” she agreed. “What would you like me to make?”

Oh dear, getting a little warm in here, going to go jump in the cold shower now before I embarass myself.