A Tribute to Vincent Price 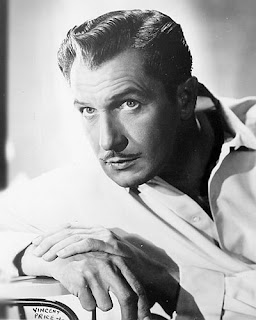 I have been thinking a lot about Vincent Price, since it's coming upon Halloween, and just a few days ago it was the 18th anniversary of his death - by the way, can you believe it's been that long? Pretty much all of my students this term were born the year he died! Time flies!

Surprisingly, Vincent Price was born in St. Louis, Missouri, of all places, on May 27, 1911. I say this not to cast aspersions on the good people of Missouri, but Price did an excellent job of always sounding so very, very continental. Eternally dashing, it is quite a mystery how he never made it as a leading man. Perhaps it was the intensity of his face, that awesome voice (which could be easily recognized a mile off and underwater), and his noteworthy height of 6’4” that kept him firmly etched in the catalog of American horror saints.

In honour of a man who helped raise my generation, I have elected to watch The Last Man on Earth (1964) as tonight’s entertainment. While this movie seems to be one of those that viewers either love to death or hate passionately, don’t let reviews sway you. I find it gripping from the first seconds of narration all the way to the poignant ending, even with my cheapie DVD print, and it seems just as watchable today as it did when made, perhaps even more so.

A world-wide plague sets about killing off humankind, but for, so it seems, the last man, Dr. Robert Morgan (Price), who is forced to make his way in the world and keep his sanity, even after it is revealed that the disease doesn’t just kill its victims, but turns them into mindless nocturnal zombies (bear with me). In the end, Price is faced with the question whether these zombies are the monsters, or whether he is, and the whole thing ends in a sort of fable about how misguided intentions can destroy everything.

I'm not usually a major booster of the whole zombie genre, and maybe this film wouldn’t work so well if it were another actor (I can put up with a lot for a good glimpse of Vincent Price), but I enjoy this thing every time I see it. The opening situation of a man alone, and facing being alone for the rest of his life, who dares not even hope for so much as a pet as company, becomes wonderfully enthralling, especially when that man is normally so well-groomed and contained. Further, the camera use and sound, while rough in places, almost seems avant-garde, and the low budget technique gives the film an eerie, pseudo-documentary feel.

Thumbs up, all the way, and, along with Night of the Living Dead (1968) and Carnival of Souls (1962), this is one of my all time favourite B thrillers of the decade.

Vincent Price died on October 25, 1993, just a few years after his touching cameo in Tim Burton’s Edward Scissorhands (1990), and remains one of the few actors of his era who is as cool and recognizable as ever, due to his appearance in some 179 movies, TV shows, radio spots and music videos over a nearly 60-year career. Let’s see those leading men try to claim that!
Posted by Anne at 9:37 PM

My favorite movie with Vincent Price is the haunted tale House on Haunted Hill!

Wasn't that is laugh in the video for Thriller?

I'm pretty sure it was his laugh - it's too distinctive not to be!

Also, I really liked Haunted Hill, as well. The walking skeleton was pretty freaky for the time, and his character was so deliciously smarmy.

I also really liked him in Song of Bernadette.

Yes, Vincent Price did the spoken-word narration at the end of Thriller. :)

I LOVE him. In fact, I just subjected my husband to the torture of watching some of his movies last weekend. House on Haunted Hill, The Pit and the Pendulum, and From a Whisper to a Scream. He finally made me turn Netflix off. *sigh*