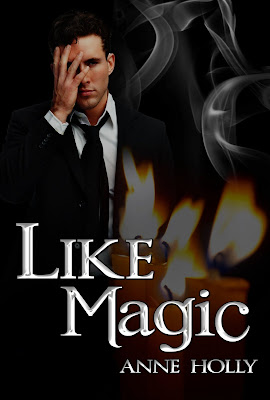 
“When I saw you,” she said, averting her eyes as her cheeks flushed rose in the candlelight, “I thought you’d come because I asked you to.”

“You were expecting someone else?” he asked, releasing a small awkward chuckle. He’d heard of many forms of embarrassing social mishaps before, but never a case of mistaken oral sex.

“Not exactly,” she smiled. “But I asked for someone to come.”

“You were what? Casting love charms?”

“Yes,” she replied, without a hint of the irony his question had contained. “I called for a man – for a lover – and there you were. Perhaps I was mistaken. You can see how I misinterpreted things.”

Ian wasn’t a man prone to flights of whimsy, nor did he believe in magic. An investment councilor who researched development opportunities for a firm partially responsible for the gentrification of multiple dilapidated areas of the city, he was well known for his vision, but also his practical analysis of costs and benefits. Now, he began to mentally list who amongst his friends would’ve set him up with a call girl pretending to be a witch on a cold, wet Halloween night.

Ken, maybe. That would explain the missing car, since he’d have access to his office where his spare keys were located. He could’ve also known the false lead Ian pursued would bring him to just empty lots, not more old industrial blocks his clients liked to turn into yuppie studios. But would Ken, or any of his friends, actually shell out money for him to get a creepy blow job?

He knew they were all pulling for him to move past his breakup with Amanda and seek out fleshly adventures as a newly-single guy. Ian knew lately he was a bit of a drag at the office, at the gym, even on poker night. But this seemed to be a tad further than even his bonehead friends would go.

Of course, right about now his bachelor party would’ve been taking place, had Amanda not walked out, so perhaps this was their idea of a consolation prize.

“I don’t know who set this up,” he began with a disgusted snort, “but if you know anything about where my car is, I’ll just grab it and be on my way.

Looking baffled, she shook her head. A single concerned wrinkle marred the smoothness of her forehead.

Deciding he’d find a phone elsewhere, he turned on his heel and made for the exit.

“Be well,” he heard her whisper softly from behind him as he opened the heavy glass and wooden door. The tiny brass bells tinkled pitifully as he walked out into the downpour.

“Shit, guys,” he muttered to himself, cursing his weirdo friends. “You could’ve picked a warmer night to punk me.”

Like Magic will be available on Kindle, Nook, epub, ebook, Adobe, and other e-formats, via a selection of vendors. I will share the links as I find them.

Now Available at:
***
Thanks for stopping by! Leave me a comment between now and midnight tonight for a chance to win a copy of Like Magic in ARC PDF, as soon as I get one from the publisher! (18+ only.)
Posted by Anne at 7:30 AM

I really want to read this one! Hope to find the time this busy October!

Congrats on your release!
Kiki

Thanks, Kiki! I understand - when you write, it really cuts into your reading time. :(

Luckily, this one is a short, so I hope people can squeeze it in.

Congrats on your release! This sounds awesome.

Yay! Congrats on your release! It sounds great! Can't wait to read it :-)

Thanks, Desi. I know I shouldn't have favourites among the kids, but I think this one is my fav of the Rebel series.

Thanks, Lori - love your blog!

Fellow Rebel Ink author Jasmine Aherne graciously posted another excerpt of Like Magic for me today on her blog, if you care to check it out:

The winner is Lori, BTW. Please send me your preferred email address.