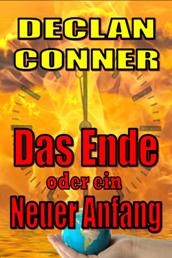 Author solves problem of language choices for eBook readers.
With eBooks crossing international English language borders, Declan Conner has come up with a novel way of overcoming the problem that creates much heated discussion on e-Reader forums.

Declan recently published 12 separate short stories to include both American and UK and Commonwealth translations in one eBook with internal links for the readers to make the choice.

To take this a stage further he has now published one of the stories with three-language choice to include a German translation. The End, or a New Dawn ( Das Ende, oder ein neuer Anfang.)

Declan Conner has released The End, or a New Dawn as an eBook and made it available in all e-Reader formats. Internal links will enable the reader to navigate the story and to make their own choice of language.

His disaster thriller The End, or a New Dawn reached the finals of a competition judged by Harper Collins editors and authors. The story is included in Lunch Break Thrillers, his UK bestselling short story compilation. Inspired by some of the notions in the bestselling book, Chariot of the Gods, by Erich von Daniken, the story is proving to be controversial in that the fictional scenario put forward extends the argument between creationists and evolutionists. At the same time, Declan uses known scientific facts to produce a scary prediction of a future climate disaster of biblical proportion.

Declan is excited about the project and plans to publish his twelve short stories in the same translated format over the next 12 months. He hopes that the eBook will prove popular, not only with readers of the genre, but also for students of German or English as a second language.