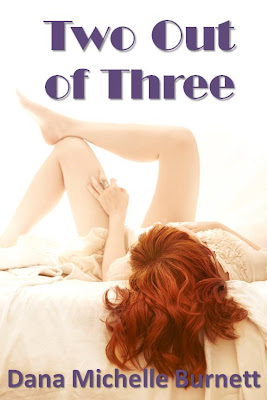 Today, I talk with my fellow KindleBoards poster and new found friend author Dana Michelle Burnett about writing, her new book Two Out of Three, and what it does to you when "life happens."

Dana, you’ve lived in Southern Indiana your entire life, what made you decide to have Two Out of Three take place in New York and Los Angeles?

If there are two places in this country where anything is possible, it would have to be New York and Los Angeles. Since the main character becomes a sort of celebrity based on her bad behavior, nude photographs, and a leaked internet video, I suppose the story had to take place where the paparazzi could have access to her. It just seemed right, so I went with it.

Sarah Deardon Allen is not the typical romantic heroine. She comes off as more than a little selfish and self-serving, but still likable. Was it difficult to walk that line and create a character that people love to hate and hate to love?

Sarah was such a fun character to write. I first created her when I was still in high school and back then she was so like me, an outcast and really pretty boring. Each time I revised her I was at a different point in my life, now I think she represents all those awful thoughts that we don’t tell anyone about. It’s easy to like her because we’re all like her in some small way or wish we could be more like her.

Rob and Sarah are drawn to each other, but are so very bad together that they truly bring out the worst in each other. Since this novel has been in the works for so long and the characters are so real and strong in my imagination, it was easy to play them off one another. I always tell people that they remind me of a modern Rhett and Scarlett.

The ending of this novel really steps away from the typical romance. Did you have that ending in mind when you first started writing the novel or did it come as a surprise?

My first drafts of the story always had the predictable happy ending with rob coming to Sarah’s rescue, then it evolved away from that into another happy ending version, until it somewhere in my late twenties it became the final ending. It took me over two decades to get this book finished, edited, and to become brave enough to release it. I think I have a different ending for every year.

You have written a decorating book and a collection of your literary works, what made you take the dive into romance?

Well Two Out of Three was the first book I wrote; I finished the last draft sometime in the late 1990’s. I moved on to literary fiction in around 2001 or so, and then I left it and went on to other things.

You left the writing world for quite a while, what happened? And more importantly, what brought you back?

The simple explanation would be that life happened. I got married a second time, had my daughter, went into the home décor business with my mother, and just got busy. Then my father was diagnosed with pancreatic cancer and I took over the business. My father passed away in November 2010 and my own husband in January of 2011. I had too much time to think so I took some of the decorating articles I had written and made them into a book, I followed that with a novel based on my previously published short stories. It felt pretty good to get back to the person I had once been and refocused on my original goals. Since Two Out of Three had been a work in progress throughout my career, I released it as a way to celebrate my new dedication and getting back to the real me.

So, what are your plans for the future? Will you be going back to the literary world or will you be staking your claim again in the romance and commercial fiction market?

I have a new book in the works. It will be a paranormal romance set closer to home. I’m trying to have it ready for a fall/winter 2011 release. I don’t write as much during the summer months as I’m spending time with my daughter, but somewhere in the back of my mind I think I’m always working out the kinks in a story even if I’m not physically writing.

What advice do you give would-be writers?

I read somewhere once that as a writer there will always be days that you will feel like an idiot, but there will also be days that you are a complete genius. My other tip would be to know when you are working too hard. During the final edits of Two Out of Three, I was working on it 14-16 hours a day. I went to sleep one night and dreamed that one of my characters was talking to me and I kept yelling at him to either speak in character or shut up. (FYI to self that is the sign to take a break.) My last piece of advice would be to just keep writing and submitting.

***
Dana Michelle Burnett spent most of her life writing short stories and sharing them with family and friends. She was fresh out of high school when she earned a spot as a guest columnist for her local newspaper The Tribune. In the years that followed, her work was published in numerous commercial and literary magazines including Just Labs, Mindprints: A Literary Journal, Foliate Oak, and many more. Her short story "John Lennon and the Chicken Holocaust" was included in The Best of Foliate Oak in 2006. She released her decorating book, Home Decorating for the Real World, last year. Her first fiction novel, Ghost Country, was released January 2011 and was followed in May with her romance Two Out of Three.

This week, Dana was gracious enough to have me visit her blog, as well, so please do visit her there.
Posted by Anne at 12:00 AM