An Interview with Author BethAnn Buehler

On Tuesday, we celebrated the launch of BethAnn Buehler’s first novel, Broken Together, which is available from OmniLit, All Romance e-books, Trapezium, Coffee Time Romance, 1erotica, and Amazon, among other sellers of romance and erotica. Broken Together, which is so hot it has been rated in the “5 or 6 flames” region on these sites, is the first of her three part Rebel Canyon series, published by Wild Horse Press.
This week, BethAnn also graciously made time to do an interview for me!


Broken Together is your first release. What did you learn from writing it?

While I know this is going to sound extremely dramatic, I've been quoted as saying that book one in the Rebel Canyon Series saved my life. Drama central, right? As I think back, what I mean by that statement is that I was at a crossroads in my life when I wrote Broken Together and by creating Rebel Canyon and the characters readers will meet when they visit, I was able to step away from the events of my real life for a few moments and pour my emotion into the story. Having such a cathartic outlet was what I needed to move forward personally.

What was it like when you got “the call”?

I received my first contract via email and it came as a total surprise. I read the email several times, re-read it, forwarded it to my husband and then called him only to have him not answer his work line. I immediately sent out the SOS text message that we have in place for emergencies. Well, it was an emergency! He called and congratulated me and then I called my best friend and first line editor and we celebrated. Then I hung up the phone and sat here at my desk crying like a baby.

My husband is very proud of me but a bit embarrassed to read my work. Because he flinched first, I don't share it with him. In fact, other than reading these interviews and visiting my author's website, he's never read a word of my stuff. I told him he can read it when he buys it! I'm also blessed to have four critique partners, women whom I respect and trust to give me honest feedback. And I have to say my oldest and dearest girlfriend, Sheri, has been there every step of the way offering opinions and questioning my story line and ideas. I always tease that without her my novel would have been a paragraph.

The writing world at the small press level is a small community. I think friendship and support between authors is vital to all of our success. I've been blessed to link arms with several of my fellow Wild Horse Press authors and we've developed great friendships as a result. In addition to having a great publisher, it's nice to have someone who understands the ins and outs of the whacky author world cheering for you and giving a shout out to your work. I think we're stronger as a team.

What new projects are you working on these days?

Right now I have several works in progress. The first is the third and final book in the Rebel Canyon Series, Broken Identity which will be released by Wild Horse Press next fall. I have a short story set around Valentine's Day that I'm working on in conjunction with my wicked muse sister writers and I've started a new series...

There are several things that I think are key for new writers. Take an editing/proofreading course early on. It's so much easier to write well the first time than re-write (learned this little tip the hard way). Network with other serious writers and join a writer's group if at all possible. Relax. It seemed to me that once I started writing and networking, everyone was writing and getting published. I'm competitive by nature so sometimes I have to remind myself that there's room for everyone and this career isn't a race.

Tell us a little factoid about yourself that we don't know.

Ok, here's an exclusive: I'm obsessed with the letter B. I was raised in a family where everyone's first name started with B. Then, when I got married, I ended up with a B in my last name, too. It was a given that our son's name would start with a B (we didn't even consider anything else) and the same goes for our two dogs. So far, in every one of my stories, you'll find a character or two whose name starts with a B.

Thanks, BethAnn, I look forward to your next release! 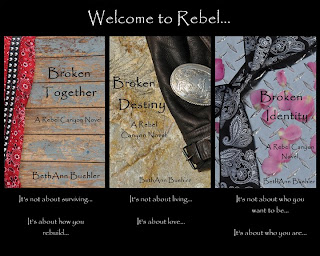