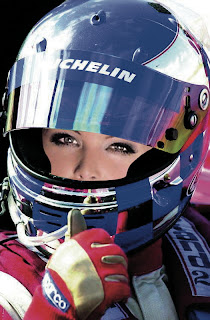 Today I welcome Dakota Franklin, an author with CoolMain Press.

Before I started school, my Dad told me to tell him a story and he’d help me turn it into a game on his computer. The story I made up was about a pilot protecting the president from dive bombers. My parents gave me my own Mac and by the time I was eight or so I wrote stories all the time.

It’s a sore point. I run the large engineering consultancy founded by my grandfather. Writing is how I express myself, a private thing, I thought. I didn’t really need publication to validate something so personal. But my guru, André Jute, takes a hard line on a writer submitting herself to publication as a test of quality. He threatened to drop me. I couldn’t bear to go back to the worthless wankers I hired as creative writing instructors before him, so I agreed. There was an offer on the table from a publisher in New York but I didn’t like their attitude, so I went to CoolMain Press, where André is editorial advisor and Gemma Coole, the publisher, basically lets me write whatever I want.

I understand that many writers have difficulty. I can understand why, having seen the bullying attitude of the New York editor I was supposed to work with. I’m glad now I insisted on going with André to Gemma. It looks like I won’t lose out financially for my “obstreperous stubbornness” either, as the jeremiahs forecast, because there is already an offer to adapt my series RUTHLESS TO WIN for television and then for film.

All the volumes in my series RUTHLESS TO WIN are complete, selfstanding, long novels with individual, different lead characters. The lead characters in all the other books are secondary characters in any one of the novels. Because it is a character based series, regardless of the appearance of being all-action novels, the moment I have a character that will carry a big novel, most of the really hard work is done, because from the character flows her problems, and from problems follow action towards solutions, which someone resists, and that’s a story. So, when I saw this hillbilly “lady racer” in one of the lower NASCAR series bring up her breakfast before a race, and then tap the flick knife in her pocket for reassurance when she noticed I saw, I had a character. When the previous book was finished, I looked over my characters waiting to have books written about them, and this NASCAR racer struck me forcibly.

By now I was so inculcated with André’s fabulous method of letting everything flow from the characters, I just put Flicka Revere on page 1 at a crisis in her life, and NASCAR FIRST, just launching, just about wrote itself. You’ll see when you read it.

I have a part of another book also just out, on which I collaborated with André Jute and another CoolMain bestseller, Andrew McCoy, on the story of a character someone else created. HENTY’S FIST•1 GAUNTLET RUN, which is free to read on Wattpad, was a lark to write, and is a lark to read. 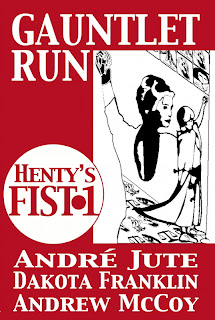 What are you reading now?

I have almost zero time for reading. My work is all over Europe and I live in Switzerland. I hit the road at 5a.m. every morning and return home about 7p.m. After that I give all my attention to my family (one husband, one daughter) until bedtime. So I write in the car, when the three associates who travel with me don’t require my attention. I’m the fastest driver among us, and we’re always in a hurry, so most of the time I have the wheel. Generally I dictate to the stenographer who travels with me, or to programs on our computers which transcribe what I say to text. Add in reading time for my professional literature, and that lot doesn’t leave much time for reading anything except editing my own texts. My bedside books for the fifteen minutes I read before sleeping are currently HENTY’S FIST•1 GAUNTLET RUN, to get the good bits I missed while I wrote my sections and didn’t have time to read everyone else’s, and the complete poems of Emily Dickenson.

There are nine complete novels in the RUTHLESS TO WIN series, complete in the sense of having been given over to the publishers and editors. There is a tenth novel, currently stalled because I can’t proceed until André works out how to break it up into several novels; there’s that much involving material. Yesterday I took the day off to celebrate the film offer. Today I feel refreshed and have, after weeks of shillyshallying, decided to write the story of Henry, who is in the process of becoming an English duke; he’s a racer too, of course, because my series is set again auto racing. That will be called THE LAST GENTLEMAN RACER. But Henry’s is a love story, and a story about a cruel man who beats women, and a story about the law of libel. Oh, and lots of racing, because Henry is moving up a class as a racer too. Because my books are so character-based, I write only one at a time. When I have an idea for a new character, I write a very short draft opening chapter, or some notes, and then leave it at that. That’s why the opening chapters of all my books are so dramatic, and so short, because they’re time out from a previous book!

I’ve been writing the series for 16 years. I’ve learned how to pick the best advisors and then not to argue with them except on matters of principle. I’ve learned that what a writer does best is write. It’s a very satisfying process. I really don’t know how I would manage if I had to handle all the many elements that other writers have to take care of, if I didn’t have so many committed, ultra-competent helpers.

Tell us a some little tidbit about yourself that we don't know.

On weekends I wear my 15 year-old daughter’s castoff clothes. I’m the trendiest mum for 300 klicks in any direction!

Great! Thanks for stopping by.

Thank you for inviting me, Anne. 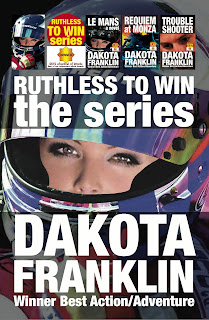 DakotaFranklin is a high performance vehicle engineer. Her series RUTHLESS TO WIN has been on best seller lists internationally since first launching at Christmas 2011. There are currently four books out, and the series is under offer for television and feature film. The first of the series, LE MANS, was voted the Winner, Best Action/Adventure in the Best of the Independent eBook Awards. The latest in the series, just launching, is NASCAR FIRST. Dakota is also the co-author of HENTY’S FIST•1 GAUNTLET RUN, which you can read free of charge on Wattpad. That’s Dakota’s photo on the cover of LE MANS. Dakota welcomes reader contacts.
Posted by Anne at 8:00 AM