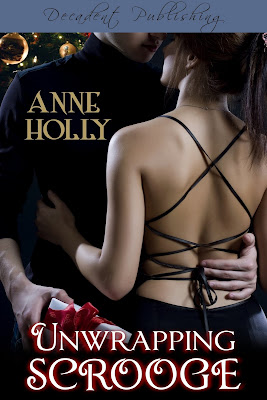 It's hot. I mean, disgustingly hot.
So, this week enjoy a little Christmas, and think of snowier times:

Bestselling author Kale McKinnon is a modern Scrooge - eccentric, misanthropic and reclusive, made bitter by the coldness of his wealthy family. But when optimistic Canadian graduate student Molly Gillis visits Oxford and invades his space, he realizes Christmas is about to change for him forever. But can he make her stay, and force himself to un-Scrooge enough to be the right man for her?

Mid-December hit with a cold wind, and news came from Mrs. McCardle that her sister-in-law was doing much better, and she’d be returning immediately after Christmas. Two more weeks. Would Kale want to keep seeing her? Molly knew he was falling behind a bit on his usual breakneck writing schedule; he had mentioned Byron’s smugness at finally being able to lord a deadline over him. Perhaps, he would want to return to his regular life. She couldn’t help but hope that they could continue to meet, even if less frequently, until she had to leave. He was an integral part of her English experience, something of which Colby would have approved had Kale been a young cousin to the royal family or something—or even a commoner, as long as he drove a red sports car.

Instead, her romantic European awakening featured a rumpled, bleary writer smothered in wool who drove no car at all, much to the delight of Molly.

That week, she had started knitting Kale’s holiday gift—a pair of woolen fingerless gloves in a dark wine color, with a soft scarf to match. She could feel the approach of Christmas in her bones, and relished the lights going up around the shops and homes. Carols begun to dominate every inch of public space, and she delighted in the childlike spirit they inspired, even if the reminder of the holiday’s approach made her miss her mother. Her budget did not allow for the expensive trip home, and even though Kale had hinted that the gift/loan of the travel costs would not hurt him, she was resolute to use her time enjoying Christmas in England and making headway on her thesis, which was coming along very well, despite the distractions.

***
Kale peeked out the window at the rising sun and the falling snow, and breathed in the aroma of bubbling coffee from the kitchen. Soon, Molly would arrive, and he rubbed his hands together in anticipation for his surprise. He had something to tell her that he was not at all sure she was going to like, and hoped, perhaps foolishly, that a special breakfast would soften the blow.

It was Friday. He knew she didn’t have class, and he had burned through his pages last night in order to clear his day today, so if breakfast didn’t work, he would convince her to go with him to find a Christmas present for herself—anything she wanted.

He knew by instinct that Molly was one of those people who adored the abominable season, and he was determined not to come off as a Scrooge. He had always spent his money wisely, though not exactly from a cheap nature. It occurred to him that he never really had anyone he wanted to spend it on, but now he wanted to lavish it on Molly. He knew she had been raised with a tight budget; he wanted to give her everything.

Money was the one thing his family had given him, he thought with a tinge of bitterness that he pushed away.

Hauling out the strawberries and the chocolate shavings, he whistled as he considered what was ahead, thinking this was the first Christmas since he was twelve to which he was actually looking forward.

~***~
You can sample my Christmas romance Unwrapping Scrooge on Kindle at Amazon, or find it at ARe, B&N and Smashwords. It is also now tentatively scheduled to release in a paperback anthology - details TBA!

Novella length, approximately 20,000 words.
(Some scenes are not suitable for readers under 18.)
Posted by Anne at 2:08 AM