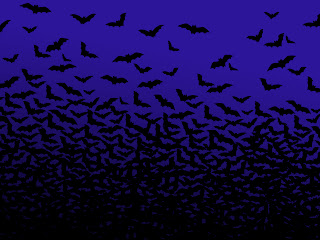 At around 4am, Friday morning, I was woken from a sound sleep - very sound, brought on by exhaustion and the first truly nice, cool nighttime temperatures we've enjoyed in some time. What woke me was our cat, Ralph, barreling up the entire length of me, from his habitual sleep-spot at the end of the bed all the way along me from my feet to my face, where he then used my head as a launchpad to propel himself into midair.

My first instinct was to cuss and try to go back to sleep. A second later, though, my brain registered what it was that had Ralph freak out on me - a BAT in my apartment!

I covered my three year old son, who (thank heavens) sleeps with me, with a sheet and a pillow - he slept on for most of the ensuing drama, and I wanted to make sure the thing didn't land directly on him. The second thing I did was lock a wildly protesting Ralph into the bathroom - I don't really need a rabid cat on my hands.

Then it was game on.

My first weapons of choice were a broom and a pillow held over my head. And, thankfully, I remembered to put my shoes on. Soon, however, I realized an empty pizza box from the recycling bin made better cover - it could also swat and flap. (Thus ends my newfound expertise and advice in the area of bat wrangling.)

I punched out the screen on the big front window, and yanked down the curtains. I closed off all means of escape into other rooms, keeping the window as the best possible solution for him. To me it seemed simple from the bat's point of view: "Large, angry woman, chasing me with broom... Big Assed Open Window? Oh, yes, please!"

Sadly, what I had here on my hands was a not-so-bright bat.

One who failed to find the window. Every. Single. Damned. Time.

I swiftly made two calls: One, to my super - who, wisely, didn't answer. It was, afterall, 4am. The second, to my dad - trusty Salt Of The Earth type who must have dealt with his fair share of bats in his life. That call went something like this (meanwhile, flustered bat is flapping madly about the place):


Me: I have a bat! In my house! A Bat!
Dad: Well, how'd that happen?
Me: Not my major concern at the moment. How do I get it out?
Dad: Well, grab it with a pillow case. Or a thick coat.
Me: Don't they have rabies?
Dad: Well, yeah. They can...
Me: Great.
Dad: Knock it out of the air if you have to.
Me: Sure - that's bloody likely.
Dad: *laughs his ass off for about two minutes*
Me: *screams and hangs up as the thing dive bombs me*

Well, I have to say, I had figured out the "grab it with something and take it outside" part on my own. I just kind of hoped my dad had a better plan. Perhaps one by remote.

So, bat is finally starting to slow down. At one point, he tried hanging behind a bookcase, which I then rattled the heck out of until he relinquished his harbour. He then hung in the kitchen, on the cabinet above the stove. Grabbing the broom and a thick, insulated shopping bag, I considered knocking him off his perch into the bag... and then realized my face would be someplace along the way between broom and bag.

Honestly, if he flew into my face, I knew I'd never be the same again.

Soon the tot woke up, but was, thankfully, extremely obedient and laid flat on the bed - though he was observing this all with great delight as his mother ran around cursing/screaming/praying all at once, while some sort of weird bird danced with her.

At one point, I lost sight of the bat. Frantic, I asked my son if he'd seen the bat fly out the window.

Well, I would never believe the thing was actually gone until I saw it leave, anyway, so it made not much difference.

Spotting the thing again, I chased it a bit more, noticing it getting slower and slower all the time. Eventually, out of puff, the bat took refuge in a toybox. I knew he was there - I saw him in that area, and could hear him. Grabbing up my courage, I emptied the toybox on to the floor, and...

For the life of me, it seemed the bat wasn't in there!

Now, I started to panic a bit. The thought of leaving for work, knowing it was in here some place, knowing I had to come back after work, and... what? Wait for nightfall for it to reappear? *shudder* No, frigging, way.

I started to kick the toys around a bit, expecting that he'd fly out. Tot started to panic a little, because he thought I was about to vacuum (yes - wild animals are fine, but major home appliances? Nope!). So, here I was, singing and trying to talk to tot in a cheerful voice, all the while needing to pee urgently (since the cat was still locked in the loo), and going out of my mind frantic.

Eventually, I resolved that the bat simply had to be in that toybox. He never left it as far as I could see. Nudging the toys with my foot, slowly, so I could see what was under them - with the brightest lamp in the house pointed at me so I could inspect - I finally found the thing!

Small, brown, wings folded under - it really could have easily passed for a swatch of fabric lying on the carpet. It certainly didn't look like Dracula's concubine, the way it did while it was swooping at my head moments earlier. His little sides were heaving, he was breathing so fast and furious.

You and me, both, little guy, I thought.

For a split second, I must admit I did consider just stomping the shit out of him. (In my defence, I was rather hyped up on adrenalin.) Luckily, my right mind returned to me, and I looked at the pathetic little thing. It was time to end our little comedy/drama.

Taking a thick folded lap blanket, I plopped it on top of him. He made no attempt to struggle as I carried him out of the apartment, out of the building, and tossed him on the lawn. He sat for a moment, there, on the cold grass, and then flittered away.

I, on the other hand, burned rubber back in the house so I could close up the now-screenless-window, because if that sucker had actually gone out of his way to get back in here... I think I would have lost my mind. Literally.

So, here in the aftermath: None of us were touched by it, thankfully, so I don't think we'll need rabies shots. I will be taking Lysol to everything. And taking some time off.

My son is fine. He had a lot of fun afterwards running around covering his head and screaming, so I could get a full sense of how fabulous I looked while doing it. Thanks kid! He thinks it's great - he has re-envisioned it as some Diego Animal Rescuer adventure.

Ralph was soon let out, and hasn't stopped patrolling and looking for his bat ever since. He did, however, get a nice plate of canned chicken dinner for his troubles, since he was the one who alerted me to the intruder. Good Kitty!

Now, I have to keep my window shut until I can get it repaired, lest the cat get out. I will call the super again in a few hours to have this screen, and the one in the back room (I can only assume that's how he got in, since it has a little tear in it), replaced, so I can have my windows open this weekend in the mini-heatwave we are expecting. I will also ask them to look around to make sure there are no bat families, bat condos, bat holes, or anything else batty in my own private belfry.

And we won't be reading Stellaluna again any time soon.

By order of a very tired, stressed out Mama.

Update: I fixed my own screen, so we are able to breathe in the heat, and I did find the entry point. The little hole in the backroom window screen is no longer quite so little, so the thing must have fought his way in there. It's been patched, so I hope he won't decide to try again. Besides, he's likely still running - scared out of his wits because someone once told him humans carry rabies.
Posted by Anne at 6:38 AM

Oh, Anne, that was too funny. (Well, since it all turned out okay.) Thanks so much for that story...started my day off just right!

I'm glad you enjoyed it! :P

You're a brave woman!

But half an hour at night with no screen on the window... you must now have entire colonies of moths instead! ;-)

No, actually, I didn't fill up with moths, oddly enough. Perhaps they heard a bat was in town and got out of Dodge.