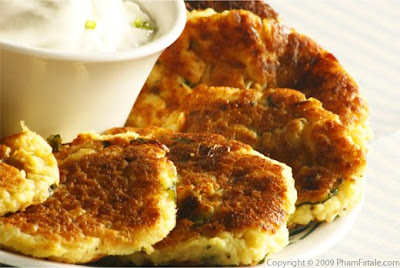 In honour of Hanukkah, here's a traditional latke recipe. Because Hanukkah, the Jewish festival of lights, is all about one day's worth of oil lasting eight days, the holiday cuisine is often fried - and latkes (fried potato pancakes) are the holiday staple. There are many low-cal, low-fat, non-fried variations out there, but, come on! - it's only once a year!

1. Peel potatoes (this is optional - I don't peel mine). Cut into chunks and blanch.
2. When ready to prepare the latkas, drain the potatoes. Place potatoes and onions in a blender. Pulse until smooth. (Can also be mashed with a glass milk bottle until smooth.) Drain mixture well.
3. Pour potato mixture into a large bowl. Add beaten eggs or egg replacer. Add salt and pepper. Add enough flour so that the mixture holds together.
4. Pour 1 inch of oil into a large, deep frying pan. Heat the oil over medium-high heat.
5. Carefully drop 1/4 cup of the potato mixture into the hot oil.
6. Flatten the pancake slightly so the center will cook.
7. Fry for several minutes on each side until golden brown and cooked through.
8. Drain on paper towels (I use coffee filters - absorbent, but less lint involved).

Serving Suggestion: Serve the latkes with applesauce or sour cream. Can also be made in a dessert variety, using squash or zucchini, with vanilla and cinnamon, instead of onion, and maple syrup or fruit as a topping.

Thank You!I will use this recipe and Late and I will let you know how they came out.

Sounds yummy. Years ago I used to make mashed potato cakes with leftovers, and fry them on the griddle. This sounds kind of similar.
Thanks for reminding me of that. I suddenly have a hunger for potatos.