The Gatekeeper Series By Stacey Thompson-Geer and Stevie Trinity 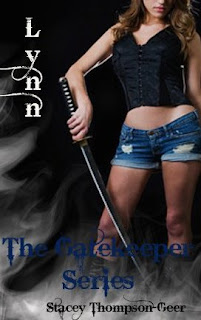 A note from Stacey Thompson-Geer on her upcoming release:
~*~

This series is about two strong women who have families and lives but when the world breaks, they are forced into fulfilling a bigger destiny. They are charged with closing doorways that have been opened to other layers of the worlds.

These women have real world issues within their families as well as facing supernatural entities that want to kill them and their families. Readers will be introduced to strong women, magick and the beginning of an underlying love story with both women.


Excerpt from The Gatekeeper Series: Lynn

I have been a warrior my entire existence. From the very first life I lived, I knew this to be true. My purpose is not my own. I’m to save people that are not ready to see the truth, not ready for the world that seems to have unraveled around them.

I walked past the dying plants in front of my new home, a hut made from trees and leaves. It wasn’t much, but it did the job against the cold Wyoming winters. I couldn’t help but wonder what the hurry was about. Normally we had a little time, but the way Rhea had sounded this time we didn’t.

I knocked and opened the handmade wooden door. A woman with long blond hair sat with her back to me, mixing herbs and at a small table. She didn’t turn to face me, but spoke. “I had a another vision.” She continued with what she was doing.

“I know. Their getting worse, aren’t they?” I stepped closer to her as I spoke.

She ignored me and kept going, “You have to go to Canada.”

“Great, more snow.” I joked fiddling with an open spot on the wall.

She turned to me and cocked an eyebrow. “There’s a group there. They don’t understand what’s happening.”

“Are they underground?” I didn’t look her way.

“What else is new?” I snorted.

“One of them is important.” She didn’t look away from me. “I just don’t know which one.”

“Perfect. So, I have to get a whole group of people out of a very Demon occupied country and get back with all of them alive? Awesome.” I sighed.

“Demons aren’t the only thing there, you know,” she smarted off. I made a face at her and started for the door. “You should take Miles with you. He’s good.”

I didn’t say anything but stopped for a moment. “You’ll watch my kids?”

“You know I will.” She said smiling slightly and I dropped my gaze to the floor. This was not the kind of news I wanted to hear. Just one day off would be nice once and a while.
Posted by Anne at 8:37 AM