Charity: A Cowboy Romance for Thanksgiving 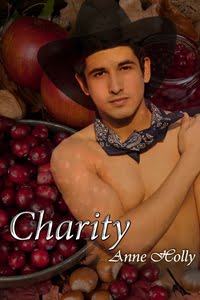 The holiday season is approaching fast, but before you break into the Christmas romances there's still Thanksgiving. Luckily, I have a book for that, too - Charity, a short erotic-romance for the turkey season!


Charity Miller has spent her whole life in an urban island surrounded by the wilds of Montana where she’s never ventured too far from her plans. But when she heads into the Big Snowy Mountains to square a land deal one chilly November, her normally-professional self fades away. Maybe it’s the mountain air or finally quitting her diet. Or maybe it’s “real-live-cowboy” Joshua Rollings and his many attractions that has her off balance.

Whatever it is, this Thanksgiving could give her a reason to be thankful for the rest of her life.

"It will definitely put you in the Thanksgiving mood!"
- You Gotta Read Reviews.

The next morning broke bright and clear, and Charity’s mood was considerably lighter than the day before. Despite being awakened by what sounded like a very chipper Kate Rollings singing an ear-splitting song to her housekeeper about a bicycle built for two, Charity had slept quite well.

She had an odd, heavy sensation that made her limbs feel like they were filled with warm syrup, but it wasn’t unpleasant. And she had faint memories of several dreams that were less than PG-13. When Joshua showed her to the room the night before, Charity noticed the odd way he’d looked from her to the bed and then averted his eyes. Clearly it must have put some very scandalous ideas in her head. Nevertheless, the fresh, cool air inspired sleep and the dreams were satisfying enough.

The bed was huge and comfortable and the room cheerful and airy. Charity was grateful to have her own bathroom and shower and paused a moment to look out the big windows over the pasture lands while drying her hair. It wasn’t snowing and there was barely a wisp of cloud in the sky, so viewing the property in question might even be a pleasant task. When Joshua informed her that the Retreat was accessible by Jeep, instead of horseback as she’d initially feared, she almost started to look forward to it.

Over a mountainous breakfast of eggs and ham that would have made her personal trainer gag, Joshua related some of the land’s history to Charity while his mother concentrated on buttering enough toast to fill an army.

There was a lodge located on the property dating back to 1946. It had replaced the first cabin built by Eli Rollings in 1869, which, by then, had been used as a hunting camp by generations of Rollings men. Joshua told her that there wasn’t much left of the original site aside from an old stone well. It seemed the previous masters of the Rollings spread, Joshua’s grandfather and father, always suspected times would force them to sell the valuable land at some point, so they’d made sure the only thing left there was the new lodge and fond memories.

“There’s still the old grown-over sinkhole where the original outhouse used to be,” Joshua teased with a chuckle as she climbed into his four wheeled truck, “if you’d like to tour that.”

“I think I can do without that, thanks,” Charity responded with a laugh. “I’m a bit of a history buff, but more of the public television variety than the kind that snoop into pioneer plumbing or lack thereof.”

“City girl,” he teased, slamming the truck door and reaching for his seatbelt. She smiled when he finally tossed a Stetson on, thinking the image was now complete.

Find it on GoodReads!

Charity is also available in my ebook/paperback collection, ALL I WANT: The Anne Holly-Day Collection.

HAPPY THANKSGIVING!
Posted by Anne at 9:00 AM