Bellefleur ruled the underworld but couldn’t rule his mate, Alkmene, a gorgeous succubus. The feared ancient vampire could crush a legion of humans but found it impossible to tame one redheaded beauty. Their tumultuous union periodically resulted in the succubus fleeing the underworld in an attempt to anger him. She’d do what she did best and that was ravish human men with her temptuous body. Her prowess in bed was her curse. It was at times like these Cyrus followed her into the world above.

This time, however, when she ran from Cyrus, she found a portal in time, traveling to the year nineteen-fifty-seven, looking to hide. But Cyrus could sniff out an opening in the time line.

Alkmene found herself a dark, handsome lover, a fallen archangel, who was ripe for the plucking. But she never figured on his lovely human conquest falling into the mix. Emmy Harris was an up and coming Hollywood starlet and the biggest thing to hit tinsel town in ages. Now Emmy became a pawn in the wicked games Cyrus and Alkmene played.

In a world called South Hedonism, all vices, indulgence, decadence, obsession and perversion flourish. All creatures foul, evil and corrupt exist in the evil inner cities. They come and go between both worlds and love to play above. But they always return. Hell has its advantages. 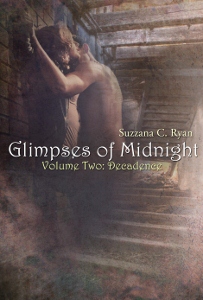 Here’s book two of Glimpses of Midnight. Here you’ll meet Cyrus Bellefleur, the dark under lord. I love him, evil with a very twisted sense of humor and a mate that tries his patience on a daily basis. She’s a beautiful red headed succubus named Alkmene.

Definition Succubus: a female demon or supernatural being appearing in dreams, who takes the form of a human woman in order to seduce men, usually through sexual intercourse.

She was Cyrus’s first big mistake. Silly vampire, he expected such a creature to be faithful. Let’s note his second mistake, falling in love with the spitfire and third, Carina, his half-breed daughter. And might I add, a quite prolific creature who disobeys her father, well a hell of a lot more than your mother.

You must read Glimpses of Midnight, Volume One, here you will encounter Carina, the half-breed orgasm-seeking daughter. Really, she’s running creatures ragged, in pursuit of the perfect orgasm. You meet, the two humans who venture into hell and pay the price. You’ll enjoy the wickedness of JL Oiler has created and her talent of getting three, count them three in one bed. She a master at ménage, and has taught me a thing or two. Oh, sorry I get lost a lot, smiles.

Well, fellow humans, time to wrap it up, got some serious writing to do. Look for Glimpses of Midnight, Volume Three, Obsession and then Four Perversion. See those heading, we won’t let you down, I promise.

Anne...Thanks so much...for having me and my good friend JL Oiler. Oh, and Cyrus, he's sitting here, groping me wants to say....mmm...thank you, snap. Vampires...oh well...smiles

Thanks Anne for having me on...and JL OIler too...Oh and Cyrus, he's sitting here with me groping me...Vampires...snap...oh well..