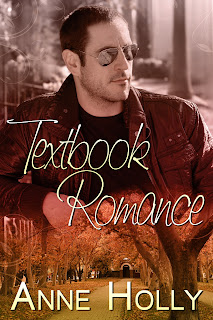 A fresh excerpt from my newest novel, Textbook Romance:

Chase after love? As a single mother, Professor Liberty Sullivan knows better. Between her flighty mother and a disastrous history with men, she's pretty much soured on the whole concept of romance. Personal freedom and self-reliance are her new guiding mantras. Raising her son and being a career star are the most important things now.

Libby shut the heavy front door with a deep sigh. Seth was, by far, the most sweetly romantic and sensual man she’d ever met. She had once thought Carson was dangerous… She could now see that Seth was potentially ten times more addictive.

But, at the moment, she couldn’t bring herself to worry about it.

Entering her bathroom, she dropped her robe and flipped on the shower. Her muscles had a strange heavy ache to them this morning, one that seemed vaguely familiar but also felt totally unique. The signs of Seth’s lovemaking were written all over her and she gloried in the reflection looking back at her in the mirror. From the tangled head of curls to the faint blue thumbprint he’d accidentally left at some point on her right hip, she was marked as a well-loved woman, and it felt terrific.

He’d brought her to long-awaited climax no less than five times the night before, and once more early this morning, and she was amazed by the fact that her body still yearned for him. He’d turned her into a wanton, clearly, and she chuckled at the thought. Her! Of all people, he had revived the wanton in her. If she hadn’t experienced it herself, she’d never have believed it.

Stepping under the hot, hard spray of the water, she soaked in the warmth and felt her overworked muscles begin to soften. He’d been eager for her to take the initiative, and she’d made love to him just as often as he had to her, leaving her a bit sore from the exertion.

Though she’d risen early and they’d had a busy night, she wasn’t exhausted. She’d slept well and deeply, enjoying the cocoon of his body. She didn’t even need to blame her thick sleep on the wine this time. It’d been the pure bliss and security of sleeping in a devoted set of male arms.

But how long will those arms be here?

Libby angrily swept aside the treacherous voice of reason. She didn’t want to doubt anything right now. But nearly a decade of mistrust born from experience was a hard habit to break, and she felt the haze of happiness start to drift away from her against her will.

Don’t get too used to those arms, the voice warned her. When he’s gone, you’ll have to sleep without them.

Cruel rationality began to seep into the morning with the encroaching sunlight, and she had the immature impulse to call Seth’s cell in the hopes that his voice would help her shut out what her bitter instincts whispered to her. She wanted to call him, to beg him to say more sweet things to allay these fears. To tell her he wanted to see her again and again and again, and that he’d never tire of her – never find anyone else. But she knew enough to know that no one could promise that, and if she couldn’t triumph over these fears by herself, she’d be lost.

And she did want to triumph over them, didn’t she?

Pouring a puddle of conditioner into her palm, she massaged the floral mixture into her hair, and considered which Libby was the real Libby – the wanton lover or the disciplined isolationist? It wasn’t an answer that came easily, and she felt a small slide of fear that she’d gone too long this way to change now.

She paused from washing her hair and stood in shock for a moment. The realization that the reason her intelligence and her heart were both going crazy was one and the same – somewhere along the way, she’d fallen in love with Seth. In a way that not even Carson had inspired. And she was scared of losing him as much as she was of embracing him.

So, now she had to decide which possibility scared her more.

Remember - Leave a comment on any of my Textbook Romance posts this weekend, and be entered to win a copy of the ebook, courtesy of Pink Petal Books.

Great excerpt! Sounds like an awesome story. Congrats on the release!