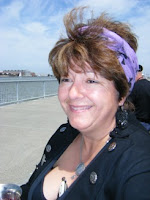 Meet Maureen Betita, a lovely lady I have been honoured to know through our mutual authorship at Decadent Publishing - and hear about her upcoming book The Kraken's Mirror, coming soon from Decadent!

It started by reading everything I could get my hands on. Then a book ends and I’m not ready for it to end and start dreaming about how I’d be a character in this world and where I would go and what I would do and suddenly, one day…I was writing!

Some godawful wanna be Robert E. Howard thing, ala Conan the Barbarian. I mean godawful. Like really, really bad.

Ooooo! Interesting story! In 2007 I almost died. I suffered sudden cardiac death and spent three days totally out of it in the hospital (husband hero of this tale as he noticed something was wrong and gave me CPR, etc.). Anyway! Months later, suffering from PTSD since all of this came out of absolutely bloody nowhere, I was sitting in a therapist’s office talking about what I had been doing the years before the EVENT. Which was writing. And she asked what I intended to do with what I was writing. And I sorta sputtered about nothing because I was too fragile and scared of rejection. She tilted her head at me and said something in line with, “You almost died. What is scarier than that? You survived that.”

Well, dang if she weren’t right. I gazed at her and I suddenly realized how right she was. Why the h*ll not try? And from then on, whenever I sent out a query, or did a pitch and got nowhere, I’d remember that I’d faced down death. This was no big deal.

Well, I actually enjoy in person pitching. One of the certifiable insane out there who do… But now that I am represented by an agent, I don’t really become involved in this aspect. Sorta sad, actually.

The day Saritza, my agent, called me about an offer, I was sitting in Starbucks (nothing unusual in that. I’m probably sitting in a Starbucks right now!). I glanced at my caller ID and blinked, stood up and walked outside so I could hear her over the blaring music and she told me I had an offer from Decadent Publishing. From what I remember from then on…I smiled a lot the rest of the day. Maybe the rest of the week.

What inspired you to write The Kraken's Mirror?

I’m a regular blogger on the Romance Writers Revenge group blog and over the course of a year we’d been blathering on about everything involved with writing, which is what we usually do…and the subject of older couples came up. And I stood strong for the passionate relationship being something the growing older baby boomers would like to see. Emily and Alan walked out of that. My H/H of The Kraken’s Mirror.

Being me, I had to make sure it involved pirates, krakens, Ipods and alcohol. And sex. It started as a lark and grew and grew… I want to be the founding author of the sex between older couples in a romance series. I also want to be famous for inventing the term piratepunk. Pirates, breaking all the genre rules!

What books or authors have most influenced your life most?

Edgar Rice Burroughs. Yup, Tarzan, Pelucidar, John Carter of Mars…serial books of adventure and other worlds. And Tolkien, who was a god in my home growing up. Once grown? The Newford series by Charles deLint.

A collection of short and scary stories by China Mieville. I have no idea why I thought this would be a good intro to the author… *shiver* These things are seriously ominous!

I’m praying I can entice Decadent into a second book set in the Kraken’s Caribbean, so I’m working on that book. This one stars another couple from the first book, Mick and Jezebel. It’s a bit heavier than the first, with elements of dark steampunk tossed into the Kraken’s Caribbean.
How important is the support and friendship of other writers?

Phenomenally important. I first reached out to other writers when I attended the RT Booklovers Convention in April of 2008 in Pittsburgh, made some good friends in Judi McCoy’s Aspiring Author class and have gone on to branch out with attending RWA conventions and hooked up with the writers on the Revenge, through my publisher, taken online classes, joined my local RWA… All of these things contribute to sources for when answers are needed, hugs are mandatory to go on, and one needs a cheering section for celebrations. Reach out, find someone!

Thrilled. Sisters are very supportive. Big bro, nephew and nieces all waiting for the book to come out. Mom is tickled pink for me. I do wish Dad were around and when I get that first copy, I’ll go visit and talk to him about it at the cemetery. My husband likes to ruminate on how one day he can relax by the pool, sipping Pina Coladas while I attend author signings. (Dreamer!)

Don’t censor myself. (Wait for the editor to do that, sigh.)

It’s been said before. Write, you twit. Stop editing and just write!
Tell us a factoid about yourself that we don't know.

I’m part bionic. (After the EVENT and no discernable diagnosis, I got an ICD. This is a little metal box above my left breast with leads into two parts of my heart. If my heart acts up again and goes berserk, the box will deliver an electrical shock to spank it back into behaving. Yes, it’s strange. Yes, I have to be patted down at the airport and yes, you can touch it if you want to. Just don’t let those hands wander too far.)
~*~

Treated by our youth oriented society as invisible and sexless Emily Pawes attends a pirate festival to recapture the make believe magic she knew as a younger woman. She wins an interesting bit of booty at an old woman's bric-a-brac stand. The Kraken's mirror is a magical portal and transports her to a land of Hollywood piratitude, where swashbuckling heroes own iPods. With little choice, she embraces the madness, deciding she’ll play pirate until she figures out how to get home. Or wakes up in a padded cell.

Instead of men in little white coats, she encounters the handsome Captain Alan Silvestri. He is a man haunted by a strange curse. Good luck is his to command, but it comes at the cost of any place to call home or people to call family. Resigned to die shunned by all, forced to sail every three days, he begins to dream of a special woman.

When they meet, sparks fly, passion flares. He needs her to be free, but more than that, he needs her to be whole. They set sail, uncertain of who has control of the wheel, seeking to defeat his curse of good luck and discover all the Kraken’s mirror plans for them.

Maureen lives along one of the most beautiful places in the world, Monterey Bay, California. Married 30+ years to her high school sweetheart, they have a dog and a cat, a garden totally out of control and a growing black hole of chaotic clutter in the house. She attends scifi conventions, pirate festivals, renaissance faires, steampunk gatherings and the rare SCA event. At present, her goal is the worldwide recognition of herself as the first to coin the phrase and genre of piratepunk.

Very interesting. I love hearing backstory on authors, and yours is definitely a story.Very intersting!

Maureen, I love your honesty and quick wit. Thanks for an interesting interview. Looking forward to the release of The Kraken's Mirror.

Maureen ~ I can't wait to meet you at RT in April. I'm sure you and I could get in a whole lot of trouble together with the rest of the DP authors! Make sure you've charged your ICD batteries so that pesky CPR thing doesn't get in the way of our fun!

It was a pleasure reading this interview and getting to learn a little more about bionic Maureen.

Intersting...I love these freaky little words we make up! Thanks for the comment, Jennifer!

Kathleen - I'm nothing if not honest, to the point of getting myself in trouble! LOL!

Best of the new year to you!

Val - I keep after my cardiologist to convert this thing to solar batteries... As of right now, I should be good to go for another 3 years or so! (knock on wood!)

Leanne, yeah, no neat-o wooshing sound when I run though. Just a lot of panting...

Wonderful interview! and call story! Well deserved to say the least. Have a wonderful New Year!

It was a pleasure meeting you at RT and I'll probably see you around at other conventions (I'm still up in the air about the next RT). I do look forward to reading your book. Happy New Year! I hope 2011 is a great sales year for you!

Thanks, Stacy! I hope you make it to LA, but if not, there will be more!

I love reading how your stories come about. And I hope you get recognition for your invention of piratepunk!

Piratepunk rules! Thanks for stopping by Donna!

Yes, Missy, but no keen-o special effects. Though if you're hugging me when my ICD fires, you will feel the shock...not enough to upset your heart...but according to the DH, it registers!

I'm hoping for January sometime for a release...we'll see!

Now if it was only a bionic hand so you could type faster! :)

Piratepunk is going to be the new buzzword of 2011.