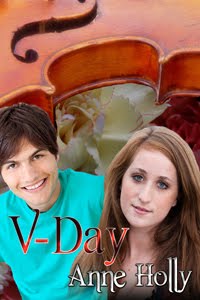 A family like Daniel’s and the solitary pursuit of musical excellence is enough to make a young man crazy. No wonder all Daniel Vouks dreams of is getting away. He knows his violin will take him places in life, but the only place he really wants to be is next door. He’s been in love with his neighbor since he was fourteen, but can he ever make her see him as more than just a lovesick kid?

V-Day is the story of a Valentine's Day weekend Daniel fears he may regret, but will never, ever forget.
Excerpt:
Daniel retreated to the music room, thankful he didn’t have a class or a practice scheduled on campus today. He didn’t even have to give any lessons until next week. The weather really didn’t look all that welcoming and he was grateful he could huddle inside as his family bustled off to their various destinations. After school, his parents would be off for the weekend, dropping his sister and her flotilla of luggage off at Kayley’s so the girls could get ready to go to the dance together, which meant leaving Daniel officially on his own until at least Sunday afternoon. Glorious.
Allowing the noise of their departures to roll off him as he sat absently at the piano, he plucked out a few strains and watched the sun glint off the fresh snow in the backyard. It was really beautiful when you could view it from a cozy place.
Blah! Another Valentine’s Day. His nineteenth one as a single guy. And, he thought ruefully, his nineteenth year as a confirmed virgin.
Jesus, even his baby sister had more going on than he did. Selby, his girlfriend in tenth grade, had been about as close to any action as he’d ever gotten. Her pathological fear of pregnancy made it absolutely essential that he keep his pants on at all times. Other than that, any girl he’d ever liked had tossed him into the “friend” basket and never bothered to reassess him.
Kelly, his best friend, did that. After Daniel followed the cute redheaded soprano around for weeks like a puppy, she finally took pity on him and explained he was simply too nice to attract her. After that, they formed an easy relationship through which both had a pal, and a no-fuss “emergency date” when necessary.
Flipping open his phone, he hit Kelly’s number.
“This better be good,” she grumbled after the fifth ring.
“Hey early riser,” he chuckled.
“Well, if I had my mom bringing me my morning coffee in bed…”
“Okay, truce,” Daniel winced. “And my mom doesn’t let me drink coffee.”
“Why not? Afraid it'll stunt your growth, stretch?” Kelly asked with a crystal clear laugh despite having just woken up.
“Something like that,” he said, flecking a flower petal off the top of the piano. “Listen…You’re probably…I dunno…busy tonight, right?”
“Are you trying again, Danny?” she groaned.
“Well, no. I just thought if you weren’t, maybe we could do something.”
“I have a date.”
“Right,” he forced a chuckle. “Yeah, I figured you would.” He straightened in his chair. “Being Valentine’s and all. No problem, just wanted to check.”
“Ahhh, Danny,” she sighed. “What about you?”
“I got a hot date all weekend,” he said over a grimace. “With that friggin’ tango, I guess.”
“Danny, do yourself a favor,” she said firmly. “Go get yourself laid. I told you that’s what’s missing from your tango.”
“Well then,” he quipped. “Support the arts and break your date. I can be there in an hour.”
“Har har har,” she said and then laughed for real. “Seriously, go fall for someone. Preferably someone who will fall for you back.”
“Okay,” he agreed. “For you, I'll try my best.”
Daniel hung up and pounded out a few more notes on the keyboard in front of him, contemplating Kelly’s method music theory that said you could only sing or play what you’d experienced. If that were the case, his tango would remain a virginal one if his luck so far was any indication.
*
For more information about my adult (18+) Valentine’s Day erotic romantic comedy, V-Day, please see my holiday stories website: http://annehollyholiday.webs.com/valentinesdaytales.htm
Posted by Anne at 12:00 AM