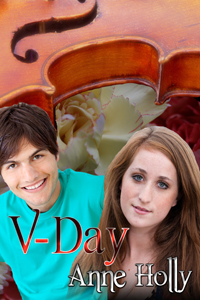 A small excerpt* from V-Day, a short erotic romantic-comedy for Valentines Day by Anne Holly – Coming from Rebel Ink Press, August 2011! (ETA: This story has since been released!)
Young violinist Daniel dreams of winning first chair of his university orchestra, and of finding love. For years, he’s adored the pretty physiotherapist who lives next door to his family home, where he lives with a mother who thinks Jello molds and sweaters are the height of cool and a father who has never been seen on the other side of a newspaper. He knows he wants his life to be different - passionate and creative. The trouble is, no girl has ever seen him as more than a friend, and the girl next door, Bronwyn, may never see him as anything other than the 14 year old peeking through her shrubs that he was when she moved in! One long Valentine's weekend, a serenade and a whim can change all that, but how can Daniel make it last more than three days?
The rest of that day and into the evening was spent in bed, where Daniel learned more in one day than he had in years of sex ed. Always an eager student, he dedicated himself to learning every inch of her body, and every means by which he was able to give and receive pleasure. She wasn’t bashful about directing him, and for that he was grateful.
“Feel good?” She liked to ask him, taking obvious pleasure in all his firsts. She told him she loved how verbal he was with his feedback, and he bit his tongue against reminding her that it was a plus to dating someone who’d evolved the gift of speech instead of grunts.
They hadn’t mentioned again, but it bothered him that the only reason he seemed to be in her bed was to chase away the thoughts of her recent breakup. He refused to think about it, and focused on enjoying making her happy.
“You know, I might be a little late with this…” he said, as they rested from another bout of excitement. “But I think I should ask you out or something.”
She laughed at his belated offer. “I’d say you kind of lucked right into the next step, there, kiddo,” she giggled, and flexed the hand she had cupped around his sensitive parts.
“Well, it’s Friday night. You wanna do something?” he asked, shrugging, eager to make the most of the weekend.
“Watch a movie?” she offered. “That way, we can stay in our jammies.”
“I don’t have any jammies here,” he reminded her. “And I’m pretty sure I might look kind of awful in any of yours.”
She bounced off the bed and retrieved a pair of loose gym shorts from her bureau. “Voila! Makeshift jammies.”
“Ah, yes,” Daniel said, crawling out of the warm nest they had made. “I forgot you athletic types always have formal wear on hand,” he teased, and Bronwyn hit him in the side of the head with a pillow for his back talk.
“Lordy,” he sighed, admiring his long, wiry form in the rather shockingly short red shorts.
“You’re adorable.” She laughed, and he flexed his rather unimpressive muscles in response, just to soak up more of her delight before slipping on the oversized jersey she handed him.
“What did I do to deserve you today, just when I needed you?” she asked, kissing him with a loud smack of appreciation before heading downstairs.
And what can I do to deserve you for longer than today?
There would be time for the “relationship talk” later. He hoped.
Watch for the first two installments from my Rebel Ink holiday series, Good for the Goose (Christmas) and V-Day over the next while, followed by Halloween (September 2011), Thanksgiving (October 2011) and New Years (December 2011)!


*Not yet finished editing for release.
Posted by Anne at 12:01 AM