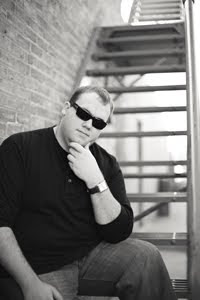 Christopher Craven grew up the scrawny middle child in a semi-liberal family residing in Phoenix, Arizona. From the time he was able to write his own name, Chris knew that he was destined to write for the world. Thanking his mother, who handed him his first adult novel in junior high, Chris strives to become a prolific name in the literary world. Preferring to write erotic romance that explores the love between kindred spirits and Romantic Suspense, Chris also enjoys barefoot strolls along the beach but can most often be found roaming the Eastern Colorado plateaus when he isn't writing. Chris can be reached on Facebook and found online at his blog, or emailed at authorcraven@gmail.com

I have learned tons. As a matter of fact, I had to enhance my knowledge of such topics as pharmaceuticals and some research involving crime evidence review and trials.

When you write a book, just worry about your writing. Thoughtfully plan your plotline and characters and just write. And don't stress about promotion until your manuscript is polished. I've seen a lot of new writers get so wrapped up in trying to market their story that they forget to write a good one. It's like trying to sell a house when you haven't even moved in yet. Don't jump the gun.

“The Book and the Rose” by A.J. Llewellyn

Well I was at the mall and I spotted a gay couple that fit the description of Miles Turner and Landon Black, then I started running into ideas after ideas. By the time I sat down to do a small plot outline, I had a great story mapped out. It enhanced as I dug deeper into my characters and listened to what my characters wanted next.

What is one factoid about yourself that we don't know?

I absolutely enjoy a Chili cheese cony dog from Sonic with mustard and lots of onions.

Love is the strongest force in the universe…

Defense attorney Miles Turner seems to have it all. At the height of his game professionally, he's just been hired to defend a famous L.A. party boy's less than stellar reputation, a case that stands to earn Miles a small fortune. And to top it off, his love life isn't bad either. Even the headache he can't seem to shake isn't strong enough to overpower the tenderness he has for his partner. Miles Turner is finally happy.

Landon Black is living a life beyond his dreams. Finishing his degree towards a career he's always wanted, Landon might spend his days studying, but his nights are filled with the one thing he can't live without--love. Even the thought of spending a weekend at the upcoming Black family reunion with his less than tolerant father isn't enough to extinguish the excitement Landon feels at the reality of a getaway trip with his lover.

But it can be taken away in an instant…

As members of the “Black Pack” come together in the snow capped mountains of Colorado at Lake Alexander, no-one can see what's looming ahead-- an event with consequences so severe it stands to alter all of their lives forever.

Prepared with nothing but his integrity and a heart full of hope, Miles is praying for a miracle while Landon, forced to play a high stakes game of life-or-death, is asking himself if the love he has is enough to offer.

And here's a bit of a teaser:

Rush hour traffic in California left more to be desired though Miles Turner was used to an hour commute. The fact of the matter was it allowed him some solitude and he enjoyed tuning into his satellite radio while making the drive.

And thank God Miles had air conditioning in his Mercedes. Although it was late September, the temperatures in L.A. still hadn't cooled that much and while he didn't want to be a mess when he got home, the image Miles' had of a glistening Landon Black waiting to get rowdy with him certainly worked.

Since Landon would be a couple hours later than usual, Miles felt that ordering take-out would be a nice change of pace given the choice of leftovers from three nights ago.

Arriving home, Miles turned the key in the front door before almost tripping on the UPS package sitting smack dab in the middle of the porch. Miles gathered the box and reached for the regular mail. Shuffling envelopes, the package and grasping hold of his briefcase with one arm, he pushed open the front door while juggling the paper sack of Chinese food in the other.

As Miles reached the kitchen, he offloaded the items on the end of a counter before turning on the Bose sound system that hung beneath a cupboard. When he felt the vibration inside his sport coat, Miles' mind immediately jumped to filthy thoughts.

Just got out of class. On my way home now. I'm famished. What's for dinner? Oh, umm… never mind. Okay, leaving now! Well, unless you wanted to… xoxo- Landon

Miles' husband, Landon, was always teasing. It was perhaps the most endearing quality that attracted Miles to the man in the first place. He remember seeing Landon that first time, watching as the young man with gorgeous eyes watched him, hiding behind stacks of poetry books in a bookstore on Wilshire Boulevard. To this day both men loved to read.

Feeling mildly romantic, Miles lit pillar candles and dimmed the lights in the dining room. Setting the table with their formal china, Miles put out a silver pail of fresh ice and nestled the bottle of Cristal into the glacial basin to chill.

Miles changed the music on the sound system to a station that played soft, classical standards, which were Landon's favorite.

While he was at it, Miles figured he'd please Landon further by changing out of his work attire, deciding on a pair of silk boxers instead. Miles generously wrapped a long silk tie around his slender neck.

The moment he realized Landon was home, Miles hurried down the stairs as quickly as he could and rested on the bottom step.

Posed with his right leg extended and his left leg bent beside, Miles faced Landon as the young man entered the entry way and motioned him closer.

Surges of intensity fragmented throughout Miles's spine. Seeing Landon react to him spread between the metallic banisters, Miles thought about what he'd done to deserve such a fantastic partner. Miles watched as Landon smiled. It was the tie. That was what really did it for Landon and Miles knew it. Seeing that tie dangle freely from Miles bronzed chest always sent the Landon into overdrive.

“I've been expecting you,” Miles announced, running his right hand through his sable brown hair.

“I've missed you, too,” Landon bit back, shuffling a quick path to his lover.

“Take off your shirt and I'll show you.”

Flinging off his shoes, Landon followed his eager partner into the dining room while sliding his t-shirt the length of his taut chest. Hearing the mellow tune of Moonlight Sonata put Landon at ease as he forgot about his day and focused on his lover.

Thank you, Anne for having me on your blog.
Posted by Anne at 7:10 PM