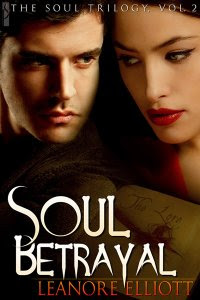 Paranormal erotica author Leanore Elliott welcomes the release of the first in her Beasts Series, Beasts of Forever, from Wild Horse Press on September 28th (which we will be celebrating here!), as well as the second of her Soul Trilogy from Silver Publishing, Soul Betrayer - on sale starting September 25th!

Constance has visions of only one kind, Serial Killers.
Her Cop-partner helps find and stop these killers, but is there more behind his cold eyes and brotherly friendship?

He pulled her from him, placed his hands onto her dress collar and ripped it all the way down and over her arms.

Her eyes grew brighter, her breathing accelerated. "Jack, what are you doing?" Her voice did not sound right to her own ears. "I thought that you said I couldn't do it for you?" A strange buzzing sound seemed to fill the room.

He looked at her breasts. "No, I was wrong, and you will see that you were made just for me." He lowered his mouth to her, flicking his tongue around a hard and waiting peak and then the other.

She arched her back.

His hot mouth took in each one and he teased them with his teeth.

It's a dream. No, it's a hot fantasy. Oh man, his mouth felt hot. "Mmm," she purred aloud. She felt a powerful flush of pure adrenaline, like she would melt right down to the floor as she leaned back. I always wanted him to look at me, really look at me with passion in his eyes, like he was gonna…

His head rose up and his eyes burned at her.

Yeah, like that. Just burn a hole right through me, burn one in me! She shivered under his gaze while noticing that his eyes were no longer dark they had turned a gold color and she felt trapped in them.

He placed his hands onto her hips and drew the rest of her dress away.
Her eyes drew down to the dress and it seemed to float down in slow motion. She swung her head up. "Am I drugged?"

"In a way…" He picked her up and turned to place her onto the dresser, "You are altered and we need to change you back."

Wicked One, you never cease to amaze me. I love your writing style and your personality. I'm very happy to call you friend!! You take care, and congrats on your awesome books.

Two OUTSTANDING entries....
Is that excerpt about Jack????Hmmmm

I want to thank Anne Holly for featuring me and we all at WHP look forward to her book release.
Charisma Knight calls me Wicked! Compliment!
Grammy is anonymous...Yes, Jack says "Don't get your panties in a twist there, Cupcake"

...But I thought Jack liked when panties got twisted...(off that is!)

Long live the wicked...it's what makes life worth living and books worth reading! Congratulations Leanore!