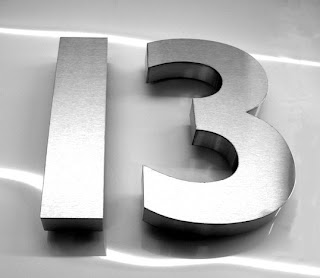 (And, yes, I know I misspelled Thirteen. I'm living on the edge here. Deal with it.)

My fiction has been published and for sale since 2010, and since shortly before that I have made it a point to discuss "the Biz" with other authors - learning the ropes, discussing Craft, spreading the good word, making connections, soaking up the gossip, and chewing on the Big Subject: sales and promotion.

I've joined forums, discussion groups, etc, etc, and this keeps coming up - How on earth do you sell your ebook?

Don't get excited that this post will help you, at all, since I clearly don't know, either. I was a fiend for doing marketing, taking guest spots and interviews everywhere for a while last winter, and you know what I made? Bubkes, that's what I made. Well, okay, maybe not quite. $17, I think, is more precise.

So, obviously, I don't know anything about selling an ebook.

Well, that's not entirely true. I know the rehashed ideas everyone recommends - blogging, guest blogging, social media (all sorts), interviews, posting your sales links ad nauseam, etc. I've even paid out for promo, and nadda. Aside from an interview on a Big Site and reviews, I haven't seen any of the normal things work.

I'm done with the "normal things." It's time to go to the mattresses on this whole promo game.

1. Shave the title of my book into the President's dog's pelt. (Not saying which President, or President of What; just a President.)

2. Convince George Lucas to release yet another butchered version of Star Wars with Greedo not shooting first, but wearing a t-shirt with my website url on it. Come to think of it, that would still be better than the "revised" versions.

4. Once I find said last remaining readers of m/f contemporary romance: Give them puppy eyes until they cave.

5. I think prisons may be an untapped market for romance novels. (Makes "To Do" note for later.)

6. Change the title of my novel to How to Make Millions Publishing to Kindle!

7. Step One: Find a Leprechaun. Step Two: Wring his bloody neck til he makes with the luck.

11. Travel the rails, living colourfully, until I die of a gamey foot - only to have my work discovered, posthumously, by an enterprising young writer for the NY Times in hipster glasses and a $200 plaid shirt who has a thing for novelists-turned-hobos.

12. Go back in time and somehow ensure I am born the lovechild of Amazon's CEO. Or at least that of the dude who's in charge of their sales rankings and "Special" lists. Or that of the guy who has college photos of either of those two that they'd prefer not be seen. (It's a fluid plan.)

13. Get caught sexting steamy excerpts with a member of the Royal Family.

Well, there you have it. How can I possibly fail this time, right?

Oh, and hey, while you're here, why not check out my Amazon profile? Free shoeshine with every hundredth purchase.* Honest, you'll see your face, guv'nah.

*Offer void everywhere. Some restrictions apply.
Posted by Anne at 12:00 AM

I'm not much one for author promo, being of the opinion that the best promotion for your books is to continue to put out new work. The problem with promotion, however, is that it's like buying a lottery ticket. Every once in a while someone says or does something that sets things in motion and the miraculous success seems to fall into her lap. It makes it tempting to keep trying.

This is very true - like a slot machine, you want to keep putting quarters in.

Not for me, any more. I'm just going to keep writing, and damn the promo, since it wasn't working anyway.