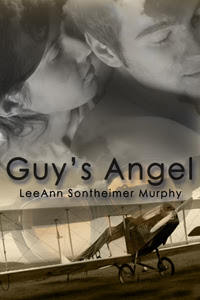 From the top of the hill crowning our backyard, I looked out over an amazing vista.  Somehow the neighborhood seemed different from that view but best of all I had a panorama of sky.  I watched the clouds puff across the blue sky.  I watched the birds wheeling high and fast.  And I saw the airplanes headed for the local airport.  Flight captivated my attention and I wished I too could soar into the heavens.

My desire is part of the inspiration behind my new release from Rebel Ink Press, Guy’s Angel.  In my second full length historical romance, my heroine, Lorraine Ryan longs to fly.  The story is set in 1925.

When a young woman really believes the sky is the limit, amazing things can happen…


Lorraine Ryan wants to fly airplanes so she heads for the local airstrip in 1925 to make her dream come true.  Most of the flyboys think she’s cute but a woman’s place is in the home, not the cockpit.   When Guy Richter steps up and offers to teach her to fly, she’s captivated with both Guy and flight.  He nicknames her “Angel” and takes her up into that wild blue yonder.  Before long, they’re deep in love.


Guy, a former World War I flying ace, is haunted by his past. His demons include his war service, the death of his only brother in an accident the previous year, and the Valkyries that he evaded in France who trail him in the hopes that they can complete his destiny.  But his dreams lie with Angel and as they grow closer and closer, he soon realizes that if anyone can save him, it’s his Angel.

When she got in sight of the airfield, she slowed her fast pace to a casual walk, plastered a lit Camel to her lip, and sauntered toward the hanger, eager and with more anticipation than she ever remembered having at Christmas.
Just outside the single hanger, her old shyness reared up and tried to choke her but she pushed it away, swaggering in the boots to show a confidence she didn’t feel now. When she walked inside, just three fellas were there, the older one who first spoke to her, Guy, and another man.
“Good morning,” she called out, hoping her voice didn’t betray her nerves.  Maybe Guy didn’t remember, she thought, maybe he changed his mind.
“Hi, Angel,” he said, relieving her worries. “Come meet the rest of the gang, the ones here, anyhow.  In case you forgot, I’m Guy, Guy Richter. This here is Pete but we all call him “Pop” because he’s the old man around here and this other goof is Charlie.”
“Pleased to meet you,” Charlie said, standing up to greet her.  “I like the duds, Angel.”
“Thanks, it’s nice to meet you too.”
In short order he introduced to some of the others, a kid too young to have been an ace in the war named Teddy, a fellow named Stan, who Guy called ‘Joe College’, and another man who ducked his head he said was Art. When Art turned on his heel, she noticed he was missing an eye and figured he might have lost it in the Army Air Corps. Two or three other young men hung around, kicking the dirt with their toes and staring at her as an awkward silence descended.
“She can’t fly like that,” the old man they called Pop growled. “She’d need goggles, a jacket, gloves, a leather helmet and she ain’t got any.  Better go home, kiddo.”
She shook her head.  “I ain’t going to scram.  I’m here to fly.”
“Leave off her, old man,” Guy said but he didn’t sound angry despite the harsh words. “She’s all right.  She looks to be close enough to Jimmie’s size she can wear his gear.”
“And I suppose you just happen to have all of it with you?” Pop growled.
“Yeah, I do,” Guy said.  “I brought it with me just for her.”
“And you’ll let the dame wear your own dead brother’s stuff? Jesus Christ on a crutch!”
Angel – because here she sure didn’t want to be just Lorraine – looked from one man to the other, more than a little upset they appeared to argue about her.
“Mind your beeswax, Pop,” Guy said, sounding irate for the first time. “C’mon, Angel, let’s get you ready to fly.”
He beckoned her to follow so she trailed behind him out to a flivver where he lit a smoke before he dug out the flying gear.
“Did I do something wrong?” she asked. “I didn’t mean to make anybody sore.”
Guy blew out smoke and shook his head.  “It ain’t you, honey, it’s just Pop. He's like a bear sometime, that’s all. Don’t get your knickers in a knot over what he said.”
“Okay, I won’t.  Thanks, Guy.”
“Aw, don’t mention it,” he said as he reached into the car.  “Here, try the jacket and see if it’s close enough to fit.”
The brown leather aviator jacket dwarfed her, much too large but she tugged it into place.
“What do you think?” she asked, pirouetting for him.
“It looks swell,” Guy said. “It’s big but you look better in it than Jimmie ever did.”
She looked down at the jacket. “Did it really belong to your brother?”
“Yeah, it did Angel.”
“What happened to him? Did he die in the war?”
Guy’s face darkened but he shook his head.  “No, we both made through the war but he bought it down at Kansas City, at the motorcycle board track not long before it closed last year.”
Angel remembered reading about a terrible accident, one in which the motorcyclist lost control of his speeding bike and veered off the track into the crowd. He died on impact and so did three of the viewers.  “I’m sorry.”
Guy shrugged his shoulders. “Don’t sweat it.  He’d like a pretty girl to wear his gear. Here, get the helmet on and the goggles so we can fly.”
His casual compliment pleased her but she didn’t say anything about it. She managed to pull the tight fitting leather over her head and put the goggles in place.  Now she felt like a giant insect and as she followed him out to the waiting plane, she figured she must look like one too.  She had one more question, though, and she turned to Guy, lips parted to ask it.
“So you were in the war too?”
He hesitated but just for a moment before he nodded.  “Yeah, I was but it was a long time ago and a long way off.  Come on, Angel baby, if you want to fly, let’s fly.” 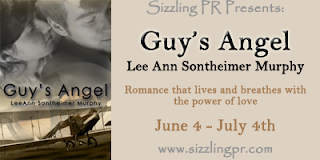 Thank you for being a host on my tour!