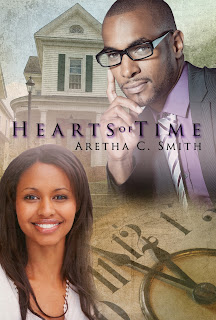 Today I welcome one of my comrades in words from Rebel Ink, Aretha Smith.

I grew up in a home without a television, so my love of books sprang from that. The idea of writing came from the love I got from immersing myself into the books I read and getting caught up in the character's lives. I wanted that same ability to create characters and worlds of my own, hence my foray into writing at the tender age of nine - although I hadn't a clue what I was doing back then. *lol*

Don't laugh, but I wrote my very first book when I was nine. I (hand) wrote in pencil using ruled sheets of paper from a notebook and then fashioned a front and back cover out of red construction paper and bound all (ten pages or so) together using staples. It was entitled "Dictionary Disco" and its premise was a school class whose teacher played a game with her class whereby she'd call out a word from the dictionary and the students, armed with their class dictionaries would race to see who could locate the word in the dictionary first and yell the meaning out in class. The winner would then receive a prize. I kid you not. Scariest part of it was, I was so proud of that story…ahh…live and learn.

While I've always wanted to make the move into publishing, it wasn't until about ten years ago that I actually started thinking very seriously about actually completing a full-length novel that might be considered worth publishing. Granted, it took me all these years to actually get around to finishing a full manuscript to submit.

I've done lots of research over the years, both from print sources and online sources on the publishing industry, what to do, what to expect etc. Talking to experienced authors on message boards over the years has also been an invaluable experience.

The moment I opened my hotmail and saw a letter from the editor with a contract attached, was worth all the years I've been plowing away at the writing craft. It was surreal. I happened to be talking to my mom on the phone while on my laptop at the same time and the moment I saw the email I had to ask her if she and I were really talking to each other to make sure I wasn't dreaming the moment.

I love reading modern romances, women's fiction etc. My current upcoming novel, Hearts of Time, is very modern, in that it involves the two man characters doing a house flip together. As you are probably well aware, house flipping has been all the rage the past five or six years. Maybe not so much now with the economic downturn, but back in 2007 when I first started the book, house flips were the business venture of the day and my love of watching house flipping shows inspired me to write a story involving one.

What books have influenced your life most?

Without question, The Outsiders by S.E. Hinton. I read that book for the first time back in 1982 when I was in sixth grade and became so involved in the lives of the characters (Greasers) being outcasts and them trying to fit in, and with the story in general. Then when I found out the author was only sixteen years old when she first got the book published it inspired me beyond words knowing that someone that young could get a book published. Being only twelve years old at the time, it gave me hope that I too could have a book published one day.

I loved The Outsiders, as well! I once put Vaseline in my hair because of that book, which tooks months to finally get out.

I am currently reading a Kimani Romance entitled Trust In Me by author named Melanie Shuster.

I usually juggle at least three projects at a time. I am currently working on another romance novel entitled A Fate By Design. Additionally, I am writing a novella entitled Raising Kennedy. And finally, I am also working on a family saga tentatively titled The Sanford Girls, which has been a long time in the works. I've gone away from it and written other stories, not because I'm no longer interested in it, but because I get busy writing other projects. But I always come back to it because the characters really want me to tell their story and it's a story definitely worth telling.

If there's one thing I've learned writing my upcoming release it would be just to trust the process of writing the story, and that once I have the characters established, they're the ones who start controlling the story anyway, so I should just trust their instincts and let the story happen.

Just to keep writing and write often. Talk to other writers both published an unpublished. Get critiques of your work whenever you can and just trust the intuitive process that comes with writing fiction.

Very important. The support and friendship of other writers is what shapes the community of writing in general. It makes you feel a part of something real, something tangible. Since I don't have a lot of writer friends around me physically, the Internet has become an invaluable resource for connecting with other writers and keeping abreast of the writing and publishing in general.

My family has always been supportive of my writing. Although in previous years they may not have understood the totality of my devotion to it, they respected that it was something I did. Now that I’m going to be published soon, they've all sat up and really taken notice as to just how serious I am about my writing. They're extremely proud of my endeavors, my efforts and achievements and brag me up whenever they get the chance...lol

Tell us something about yourself that we don't know.

My musical tastes are extremely varied. Sometimes it's classical, other times it's jazz or pop. Other times its rock--really, really HARD rock. I’m a real sucker for an ear-piercing guitar solo.

Thanks, Aretha! Best of luck with Hearts of Time.

Author bio: I view writing as my greatest passion. I love weaving stories together and creating interesting characters and peppering their lives with conflict. I'm also a fitness fanatic and when I’m not busy writing, I’m more than likely doing something fitness related like working out or thinking up healthy meals that not only fuel my workouts but that taste great also. I get a good rush from lifting weights and a good blast of cardio. Strange as it seems, sometimes good story ideas come to me while I’m on the treadmill or pumping iron.

You can visit Aretha at her blog, www.arethacsmith.wordpress.com.
Posted by Anne at 12:00 AM

Thanks for the interview Anne! So cool that you, too were a fan of The Outsiders! :)