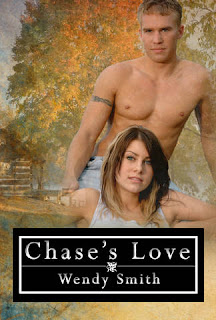 Rachel wasn't looking for love. As a matter of fact, she'd written off men altogether as the last thing she wanted in her life was another controlling jerk. At least that was the plan until the guy of her dreams walked into her life.

Chase Jamison had just got out of the military and was working toward expanding the business he started with his brother and best friends. He had a goal and he was focused. Never in a million years did Chase expect to find the sexiest woman on earth at his club.

As Chase and Rachel come together and try to find happiness, one question remains. Will Rachel's ex-lover step in and keep the pair from finding true love?

Wendy, what does it feel like to have a book published?

That is a great question while I was sitting at Olive Garden talking to one of my best friends we were discussing how after 6 months of just doing it my first book is going to be published. I told her that it almost seems surreal to me; after all this all started as a dare at her house between my husband and myself. See for some reason my hubby thought that since I buy so many books that they might be considered tax deductible. Dawnn and I laughed so hard at that thought; then he suggested that since we thought that it was so funny that we should write a book. Well we went home, I sat down in front of my computer and the next thing you know I had over 3000 words and Chase, Rachel, Toni, Allison, Drake, Joey and Mike were coming to life. Since that time my partner in pen, Mollie Fiegel, and myself have developed and watched these characters come to life, grow, love, hate, hurt and rejoice in our books. We also created a second set of books that came to me one morning in the shower, Ok, I know that is probably not the most creative way to have an idea but seriously I will wake up and have an idea so I put it on paper or run it past Mollie on our way to work.

I am super excited and thrilled that after we submitted Chase’s Love that it was accepted and now being published. I just hope that everyone that reads it is as thrilled as I am with the book.

Find Wendy and learn more about her work at www.wendysmithbooks.com!
Posted by Anne at 5:23 AM