Ian Hannigan was having the worst day of his life. A real estate prospect turned out to be a prank, his car has been stolen, and he’s stranded in the worst neighborhood he can imagine on Halloween night. If he believed in magic, he would swear he’d been cursed. Nothing could possibly make this day any worse or better… That is, nothing but Raven, a mysterious occult shop owner who not only claims to be a witch, but insists that she summoned him as the answer to her aching loneliness.

Coming October 3, 2011, from Rebel Ink Press.
***
And to unveil the brand new cover for Charity, my erotic-romance for Thanksgiving, also coming in October... 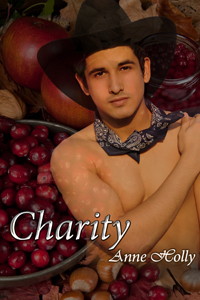 Charity Miller has spent her whole life in an urban island surrounded by the wilds of Montana, but she’s never ventured too far from her plans. But, when she heads into the Big Snowy Mountains to square a land deal one chilly November, her normally-professional self fades away. Maybe it’s the mountain air, or finally quitting her diet… Or maybe it’s “real-live-cowboy” Joshua Rollings and his many attractions that has her off balance.

Whatever it is, this Thanksgiving she could give herself a reason to be thankful the rest of her life.

You're a busy woman, Ann. Well done on your new book releases.

Thanks! I am a bit busy, but it keeps me out of trouble. :D